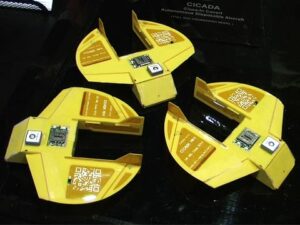 The U.S. Naval Research Laboratory (NRL) has announced that its small glider, the Close-in Covert Autonomous Disposable Aircraft (CICADA), has been awarded a ‘2015 Best of What’s New’ award by the distinguished science and technology publication, Popular Science.

The Popular Science Best of What’s New Award nominates ideas that are revolutionary, that transform their category, solve an unsolvable problem, and incorporate entirely new ideas, and functions, i.e., the product or technology must exist and must be demonstrable and testable.

The CICADA unmanned aerial vehicle (UAV) is a low-cost, GPS-guided micro disposable air vehicle that can be deployed in large numbers. Having no source of propulsion onboard, the small craft is released from another airborne platform at altitude and the CICADA then glides to its destination. Its lack of a motor and small size makes it nearly undetectable in flight.

“Essentially a flying circuit board, CICADA is inherently stable in glide and is designed for launch from manned or unmanned aircraft, balloons, or precision guided munitions,” Edwards says. “After deployment, CICADA glides to a waypoint, enters an orbit, and then descends within that orbit until it reaches the ground, typically landing with an average error of fifteen feet from the commanded orbit.”

Having a 3.5 to 1 glide ratio, CICADA allows sensors to be deployed at very comfortable standoff distances. In the air, meteorological, chemical, or biological measurements can be taken, quickly sampling a large volume of the sky. Once on the ground, communication nodes will be established.