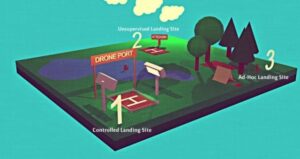 Senseable, a developer of drone technologies, has announced that it has successfully finished the first round of tests of a new drone safety system, designed to guide aircraft to a safe landing site if technical problems arise during flight.

The safety system consists of three parts: an online database of known landing sites, a system (ALF: Automatic Landingsite Finder) that continuously identifies emergency landing sites, and a system (STL: Safe To Land) that is able to determine movement in a chosen landing site before the actual touch down. The system is lightweight and can be attached to almost any drone.

Senseable CEO Jesper Andersen said, “Developing safe technologies for use on drones has such a big potential and is a very exciting mixture of technologies. People tend to forget the seatbelt and airbag equivalents when talking drone technology. Being safe is what comes first, and we need to develop technologies that make the use of drones 100% safe, both for the drones as well as everything below. With Google, Amazon and Walmart wanting to deliver parcels by drone, we will see an increased need for technologies that helps to prevent accidents. Our system enables the drones to act upon different levels of failure and need of a place to quickly land – With ALF and STL combined, you get a very high degree of safety in potentially dangerous situations.”