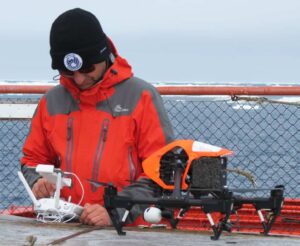 The Australian Antarctic Division has announced that a quadcopter drone has helped navigate the research and supply ship Aurora Australis through the sea ice on its annual resupply voyage to Casey station. Flown off the aft deck of the ship, the unmanned aerial vehicle (UAV) provided the crew with real-time imagery of the sea ice conditions ahead of the ship, optimising navigation decisions.

Australian Antarctic Division Future Concepts Manager, Matt Filipowski, said the drone was a valuable addition to the current suite of sea ice navigation tools, which include satellite imagery and radar.

“This is the first time the Australian Antarctic Division has used drone technology to assist ship operations,” Mr Filipowski said.

“Because the compass couldn’t calibrate on the ship and its need to work alongside the unit’s GPS, there was potential for the UAV to behave unpredictably. We found that by disabling the GPS and flying the drone in full manual mode enabled the drone to operate successfully and deliver the required footage.”

The quadcopter made five flights during the nine-day voyage to Casey, needing eight minutes in the air for each flight to collect the necessary data.

“Unlike deploying a helicopter from a ship, a drone can be launched in a matter of minutes, costs little to operate and saves valuable cargo space because it only needs a 4m x 4m space from which to be deployed,” Mr Filipowski said.

A decision regarding the use of such technology into the future will be made following a full review of the proof of concept flights.

Australian UAV also used a fixed-wing drone to map around Casey station from the air, mapping 30ha in the space of 20 minutes. The data will be used to assist in environmental management planning.