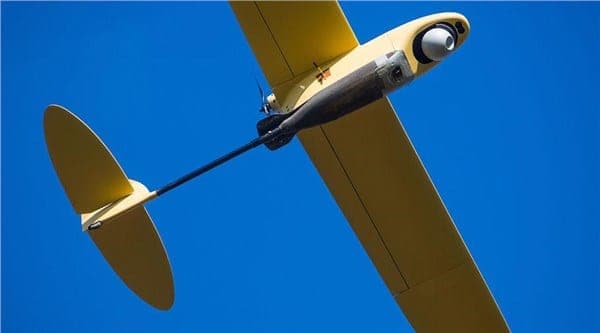 With the increase in battlefield anti-drone countermeasures, modern field units need platforms with ever higher security and survivability capabilities to ensure that they are not neutralized during combat operations when the intelligence that the drones gather is most crucial.

Spy’Ranger has been designed by a team consisting of drone developers from both Thales and French aerospace SME, Aviation Design. Its development rests along four technological pillars: a robust and innovative electric powered airframe, an advanced gimbal to optimise observed frontline and range, a tactical datalink standard, and a combat-proven command and control software.

The Spy’Ranger gimbal will maintain the camera and sensor equipment on target even if the aircraft is pushing the manoeuvring limits of its airframe. This makes it effective under most tactical scenarios, especially when overflying enemy airspace, meaning that whatever the situation, field units will not lose intelligence data during combat.

The tactical datalink communications are secured and encrypted to maintain service availability in jammed conditions and to prevent intrusions into the system. For a unit in the field this level of fidelity is crucial to maintain operational intelligence even in the most difficult operations against well-equipped adversaries.

The combat-proven command and control software provides an effective user interface that allows the drone to be operated by a single pilot and with a reduced training phase.

“Surveillance and reconnaissance drones provide a tactical advantage that hasn’t been seen since the deployment of radars by the Allies during the Second World War. This is why anti-drone countermeasures are a growing threat that make more robust drone platforms a priority.

Spy’Ranger has been designed from first principles to remain combat effective in all tactical scenarios. It once again provides armed forces and security forces with an insurmountable tactical advantage, the ability to see the enemy wherever they are, at all times, no matter what they do to try to neutralise it,” said Jean-Pascal Arrou-Vignod, Vice President of optronics solutions, Thales.