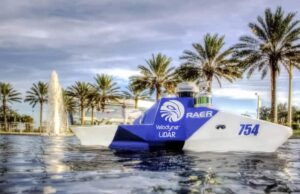 Embry-Riddle Aeronautical University has announced that for the second year running it has taken first place in the annual RoboBoat Competition, held this summer in Virginia Beach, Virginia.

Outfitted with Velodyne’s compact 16-channel 3D VLP-16 LiDAR Puck, the pilot-less Embry-Riddle vessel crossed the finish line ahead of the 15 other teams participating in the event, which was sponsored by the Office of Naval Research (ONR), the Association for Unmanned Vehicle Systems International Foundation (AUVSI) and several industry partners. The VLP-16 from Velodyne’s LiDAR Division is part of a growing family of solutions built around the company’s Light Detection and Ranging technology.

A year ago, Embry-Riddle finished first with a boat that incorporated Velodyne’s 32-channel HDL-32E LiDAR sensor. “Our performance in the RoboBoat competition was made possible for the second year in a row by the amazing Velodyne sensor,” said first-year student and team lead Kelsey Klein. “The Velodyne VLP-16 puck is an integral part of our autonomous vessel, and pairing it with our robust identification and classification algorithms gave us the edge to successfully complete the aquatic obstacle course.”

Hailing from places as far-flung as Indonesia, Taiwan, and South Korea, teams were evaluated based on the performance and designs of their student-built vessels. The mandatory tasks measured vessel speed, navigation and propulsion. Among the other challenges: automated docking, obstacle avoidance, launch and recovery from a moving boat, return to dock, and acoustic beacon positioning.

“The Embry-Riddle team’s success was largely due to Velodyne’s continued support, this time with the quick turnaround of a VLP-16 unit,” said Hitesh Patel, former team member and now a consultant. “Last year, we were the first team to debut the HDL-32E and this year, with Velodyne’s state-of-the-art sensors, we continue to prove the benefits of Velodyne LIDAR products in today’s autonomous technology applications. The team loved the VLP-16 sensors just as much as they did the HDL-32E. Having used the HDL-32E made it easier for the team to integrate the VLP-16 onto the RoboBoat platform.”

“Our 3D LiDAR sensors guide autonomous vehicles on land, on the seas and in air, and our hats are off to Embry-Riddle University for retaining its crown,” said Wolfgang Juchmann, Director of North America Sales and Product Management, Velodyne LiDAR division. “We’re recognized worldwide for developing real-time LiDAR sensors for all kinds of autonomous applications, including 3D mapping and surveillance. With a continuous 360-degree sweep of its environment, the lightweight, extremely affordable VLP-16 is scanning power in a pint-size package – and is ideal for taking on obstacle courses, wherever they may be.”

Added Kelly Cooper, program officer, sea warfare and weapons, ship systems and engineering research division, Office of Naval Research, “the [RoboBoat] course provides students with realistic maritime environment missions. The successes and challenges students experience via the competition are good preparation for a future in engineering. From completing a run to making onsite adjustments, RoboBoat offers students a first-hand look at what real-life engineers go through when developing and testing navy technologies for our sailors and Marines.”