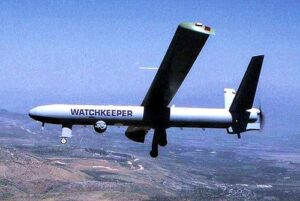 Thales has announced that its Watchkeeper Unmanned Aircraft System (UAS) has successfully flown alongside commercial manned aircraft in controlled civil airspace. The company claims that Watchkeeper is the only certified platform of its class able to undertake such a flight, and that this is the first flight for a UAS in non-segregated air space.

Watchkeeper flew from West Wales Airport into civil controlled airspace for an hour, where it was successfully managed by NATS, the UK air navigation services provider, for the first time.

The flight forms part of Project CLAIRE, a collaboration between Thales, NATS, the Dutch National Aerospace Laboratory NLR, the UK Ministry of Defence (MOD) and the UK Civil Aviation Authority (CAA) and was joint funded by the SESAR Joint Undertaking.

Watchkeeper’s type assurance and certification allows it to fly in non-segregated airspace, a certification pedigree that is transferable to regulatory authorities within other NATO member countries and the European Aviation Safety Agency. This aviation first will help develop the necessary operational and regulatory conditions to support a growing need for unmanned aircraft system to be used in commercial, search and rescue, homeland security tasks, critical infrastructure and border protection.

Air Commodore Pete Grinsted, Head of Unmanned Air Systems Team at the MOD’s Defence, Equipment and Support organisation, said: “This is a landmark achievement for UK aviation history and the Watchkeeper programme, and was only possible thanks to a collaborative approach involving Thales, CAA, NATS and the MOD.”

“The successful flight is the result of months of systematic planning to ensure Watchkeeper was safely controlled by UK Air Traffic Control agencies at all times. This is also an exciting step on the path to safely integrating military and civilian unmanned air systems into civilian airspace over the coming years.”

This flight together with the successful delivery of Watchkeeper into service demonstrates how Watchkeeper X, Thales’ tactical product based on the British Watchkeeper programme, provides a strong solution to meet the requirements of both France’s UAS programme and Poland’s Gryf Tactical UAS programme.