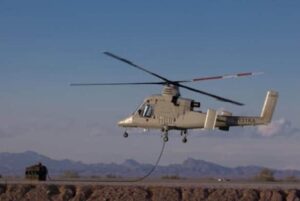 The U.S. Department of the Interior has announced that Lockheed Martin and KAMAN Corporation have demonstrated how the remotely piloted K-MAX helicopter can be used to perform wildland firefighting scenarios, including cargo drops, single target water drops, and progressive line building with a bucket. The demonstration provided officials from the U.S. Department of the Interior and U.S. Forest Service Fire and Aviation Management the opportunity to evaluate the capabilities of the unmanned helicopter.

For more than 80 years, manned aircraft have provided important support to firefighters during wildfire suppression operations. However, there are limitations to the level of support manned aircraft can provide during diminished visibility or at night. The Department of the Interior and the Forest Service therefore launched a joint Unmanned Aircraft Technology Demonstration Strategy to evaluate the use of optionally piloted helicopters to better support wildland firefighters when conditions preclude the ability of manned aviation. This demonstration was conducted as a part of that interagency strategy.

Conducted at the Lucky Peak Helibase outside Boise, Idaho, the demonstration was the latest phase of Interior’s and the U.S. Forest Service’s exploration of new aviation technologies to improve the safety and effectiveness of wildland firefighters. Lockheed Martin and KAMAN had already completed an initial demonstration of optionally piloted aviation technology (controlled remotely or by onboard pilots) in the highly controlled environment of a Federal Aviation Administration designated Unmanned Aircraft System Test Site in New York state. During the 2015 fire season, smaller unmanned aircraft systems (UAS) were successfully deployed on a limited basis during two wildland fires. During these missions, the UAS provided mapping and reconnaissance data.

“We owe it to the firefighters on the ground to continually explore technologies that improve their safety and best support their efforts to protect communities and our nation’s natural and cultural resources during a wildfire incident,” said Mark Bathrick, director of Interior’s Office of Aviation Services. “The integration of technology that could more than double the time we’re able to provide them with logistical and direct air support could be a game-changer in this mission area.”

“Considering the interagency nature of wildland fire management, it just makes good sense to have a common strategy for the thoughtful examination of new and evolving technologies to enhance the safety and efficiency,” said Art Hinaman, assistant director for aviation of the Forest Service Fire and Aviation Management. “Today’s demonstration brings us one step closer to increasing aerial support to our firefighters.”

“The unmanned K-MAX has a proven track record of being able to provide 24/7 support, assisting those on the ground in accomplishing their missions,” said Dan Spoor, vice president and general manager of aviation and unmanned systems at Lockheed Martin’s Mission Systems and Training business. “Unmanned K-MAX’s insertion into firefighting operations offers fire suppression, aerial support and potential crew extraction to reduce risk to ground firefighters and aircrews.”