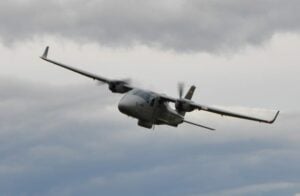 Indra’s General Manager of Defense and Security, José Manuel Pérez-Pujazón, took advantage of the firm’s participation in the conference to make the announcement. The new version of the aircraft has already passed the viability tests and experimental demonstration, and Indra is currently working on the system certification and testing phase. The company has told the Regional Government of Galicia that it would be willing to conduct these activities at the UAV development center to be built at the Rozas airdrome in Lugo.

The aim of the development is to bring an unmanned aircraft to market for a price of less than 6 million euros per unit. “The system will offer 12 hours of flying time without touching down, high-performance maritime reconnaissance and search and rescue capabilities, and unbeatable operating and maintenance costs,” said Pérez-Pujazón.

Indra initially developed the P2006T MRI as a low-cost airport surveillance solution based on a light manned aircraft, designed to complement coastal reconnaissance systems which have been deployed by different countries to protect and guard their maritime borders.

Coastal maritime reconnaissance systems offer effective cover of the area extending from the coastline out to 20 or 30-mile radius. However, the economic interests of coastal countries may extend beyond this radius up to the boundaries of the maritime exclusion zone situated 200 miles from the coastline, or up to the halfway point between the coasts of two countries when the distance between them is less than 400 nautical miles. This is the case in the Mediterranean Sea, where the distances between coastlines belonging to different countries often form part of maritime exclusion zones situated within a radius of 50 to 80 miles.

The P2006T MRI is designed specifically to cover these areas, with operating costs significantly lower than those of traditional maritime reconnaissance aircraft. The miniaturization and greatly reduced weight of the radar and infrared sensors and automatic identification systems (AIS) required for the mission mean that they can be installed on light aircraft designed for low-consumption leisure aviation.

The current manned version of the aircraft can undertake six hours of flying time without touching down, and the new unmanned system will double that. Fuel consumption is 32 liters of automotive gasoline per hour of flight, which permits the on-board installation and integration of not only a Seaspray 5000E active electronically scanned array radar (standard Royal Navy equipment), a high-resolution visible and infrared camera, and an AIS, but also a line-of-sight radio link with an effective range of 180 nautical miles and an Inmarsat terminal. This terminal sends real-time transmissions of the radar signal, visible and infrared video, AIS data and the aircraft’s navigation data to a ground station, where they are monitored in real time.

The P2006T MRI has been successfully tested by the Spanish Civil Guard and Frontex in the Indalo operation that is carried out every summer along the south coast of Spain; in Operation Cross Eye recently conducted in the Sicilian Channel; and in the demonstrations of the European Union’s Perseus system carried out in the Alboran Sea and Aegean Sea. The European agency Frontex also recently chose it for future aerial reconnaissance of maritime and land borders.