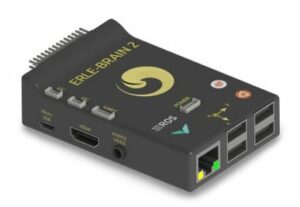 Erle Robotics, a developer of Linux-based robotics systems, has announced the release of Erle-Brain 2, a streamlined and enhanced upgrade of the company’s first Erle-Brain robot platform.

Erle-Brain 2 supports APM and other Dronecode Foundation tools, and enables customers to create tailored, intelligent unamnned aircraft, rovers, boats and other robotic vehicles and systems. It is multi-platform, embracing the communities of Raspberry Pi, BeagleBoneBlack and Odroid, thus allowing developers to choose their favoured platform.

Using the robot Appstore, created by Erle in partnership with Canonical, developers can also access a market place to design and sell robot behavioural software.

“We are excited to see how people will use the Erle-Brain 2. Its predecessor has already been used to deliver defibrillators to heart attack victims, provide WiFi networks in hard-to-reach zones and to monitor volatile chemicals in volcanoes. Our main market, however, remains school and universities where our robotics future is being shaped,” said Carlos Uraga, CEO of Erle Robotics.