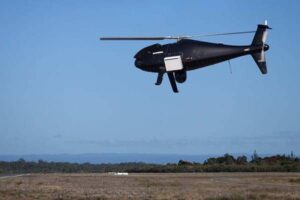 Schiebel, a developer of helicopter unmanned aircraft systems (UAS), has announced that it has successfully demonstrated the multi-sensor capability of its CAMCOPTER S-100 UAS to the Royal Australian Navy (RAN) and other Australian Government Departments.

The demanding trials took place near Nowra, on the South East Coast of Australia, and encompassed multiple scenarios, performed during both the day and night. The primary goal was to provide RAN with a comprehensive understanding of how an advanced rotary wing UAS could be effectively used to support maritime and littoral Intelligence Surveillance Reconnaissance (ISR) tasks.

The three key mission payloads – the Finmeccanica-Selex ES SAGE ESM and PicoSAR radar and the L-3 Wescam MX-10 – were operated in realistic maritime security scenarios in the littoral and open ocean.

Hans Georg Schiebel, Chairman of Schiebel said: “This multi-sensor capability of the S-100 is a key element, showing the comprehensive flexibility of our proven system. We feel honored that we were invited by RAN to this demonstration.”

Selex ES highlighted how the combination of the CAMCOPTER S-100 with their SAGE ESM and PicoSAR radar can extend the surveillance horizon of naval vessels and enhance situational awareness. The data provided by the ESM and radar sensors is crucial to understanding the maritime environment, which was proven in demanding conditions throughout the demonstration.

Schiebel claims that the CAMCOPTER S-100 is the only UAS in its class that is able to carry multiple sensors combined, enabling customers to gather images with an EO/IR camera, to detect and to identify electronic signatures with a ESM antenna and to use a Synthetic Aperture Radar (SAR) in real-time with only one system.

Additionally, the demonstration allowed RAN personnel to study the pre-flight, operation and post-flight procedures of the CAMCOPTER S-100 UAS.