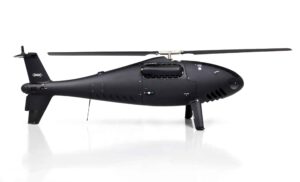 HF communications play an increasingly significant role for military, para-military and civilian applications. Beyond Line-Of-Sight (BLOS) communications are achieved today through HF radios without the need of using expensive satellite communication, and risk of being intercepted through SATCOM communication servers. Whether using sky wave propagation or a close range network utilizing ground waves, HF communication is proving to be a practical solution in growing use by contraband smugglers, pirates and terrorists. This fast growing use of HF communication has created increasing interest for HF intelligence systems.

Schiebel’s CAMCOPTER® S-100 is a proven capability for military and civilian applications with more than 200 systems in operational use worldwide. It operates in day and night, under adverse weather conditions, with a beyond line-of-sight capability out to 200 km, both on land and at sea.

Installed on the S-100 UAS, with automatic shipborne vertical take-off and landing (VTOL) capability, the ELK-7065 3D HF COMINT SENSOR can operate autonomously or as part of Intelligence, Surveillance and Reconnaissance (ISR) networks in joint operations.