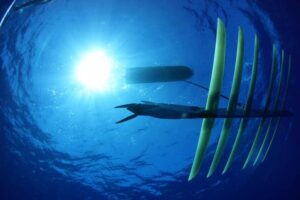 Liquid Robotics, a manufacturer of unmanned ocean robots, has announced that it has been chosen by The Economist as the winner in the inaugural Ocean Innovation Challenge. The announcement was made at The Economist’s World Ocean Summit Gala event, where Liquid Robotics was honored for the Wave Glider, the company’s revolutionary wave-powered ocean robot. Selected by a distinguished panel of judges composed of international luminaries in the ocean, investment and governmental sectors, the Wave Glider was chosen from over 60 global entrants for their pioneering technology that “contributes most to the ‘blue economy,’ while presenting an environmentally sustainable and commercially viable solution.” Roger Hine, Co-Founder, CTO and inventor of the Wave Glider, accepted the award on behalf of Liquid Robotics.

“We are absolutely delighted that Liquid Robotics has won the inaugural Ocean Innovation Challenge,” said Charles Goddard, executive director, World Ocean Summit, The Economist. “Sixty competitors came in from the beginning and were whittled down to three and then to one. We feel Liquid Robotics was a tremendously deserving winner mainly due to the importance of ocean monitoring as it will be one of the most critical things in the future of our understanding of the ocean and how we interact in the Blue Economy. We are delighted this particular innovation has won.”

“We are honored and thrilled to be named the winner of The Economist’s inaugural Ocean Innovation Challenge,” said Gary Gysin, President and CEO of Liquid Robotics. “This recognition underscores the importance and unlimited potential robotics has to offer to all economies including the Blue Economy. When we look back decades from now we’ll be amazed at the discoveries and new businesses fostered through ocean robotics and we are thrilled to be leading this charge.”