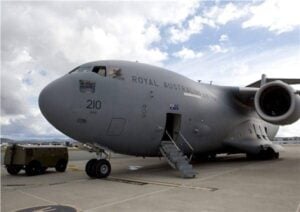 The Australian Department of Defence has announced that its latest Air Force capabilities have been demonstrated to senior Australian Defence Force (ADF) personnel in Canberra. An Air Force C-17A Globemaster, fitted with a new advanced satellite communication and imagery display system, streamed full motion video on large screens in the aircraft from a Heron remotely piloted Unmanned Aircraft System (UAS), operating 2000km away over Woomera Test Range in South Australia.

The new system is an outcome of Plan Jericho, the plan to transform Air Force and the wider ADF into a fighting force that capitalises on the high technology systems that are being introduced over the next few years.

Director of Plan Jericho, Group Captain Robert Chipman, said that the system was a good example of exploiting and connecting capabilities that Air Force, Army and Navy currently operate.

“The networks and systems demonstrated in Canberra today allow passengers in the aircraft to receive live updates and video of their destination, such as enemy positions or disaster damaged areas, right up to the point of insertion,” said Group Captain Chipman.

“The systems may also provide utility in supporting other kinds of operations such as Aeromedical Evacuations by giving medical staff on board the ability to video conference with specialists on the ground.”

Plan Jericho will look at all aspects of ADF operations and support – systems, command and control, training, simulation, organisational structure, trade groups – to ensure Air Force, Army and Navy jointly operate their new and existing capabilities in the most effective manner.

The aircraft was in Canberra as part of the Air Force’s Jericho Dawn series of capability demonstrations.