aitech-defense-systems-inc News By Caroline Rees / 11 May 2015 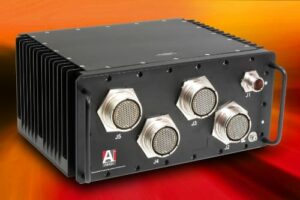 Aitech Defense Systems Inc., a manufacturer of embedded and mission-critical computing technologies, has announced the release of the rugged A661 48-Port Gigabit Ethernet Switch, which offers the largest number of GbE ports in a robust military qualified enclosure.

Durable and robust enough for use in several military, aerospace and LEO space environments, the radiation-tested and qualified A661 is ideal for interconnecting weapons platforms to multiple independent data servers creating large, compute clusters and interfacing to data archive drives. For example, it can provide control and data pathways to remote experiment Low Earth Orbit platforms including the International Space Station.

The compact 2 x 24 GbE switch unit is comprised of two of Aitech’s Series 400 conduction-cooled C660 24-port Ethernet switches encased in a durable, lightweight, cold plate-cooled enclosure. It is EMI/RFI-protected and housed in a rugged chassis to withstand severe shock and vibration as well as exposure to environmental elements, such as altitude, humidity and temperature extremes.

Complete with its own operating system (OS) and Ethernet application, this new, managed switch requires no additional user code and functions and operates as a stand-alone unit.

The C660 boards within the A661 support Layer 2 and Layer 3 routing and switching for all 48 ports via a Marvell Presera 98DX4122 multi-layer packet processor. All ports support connections up to 1000Base-T and offer many features such as auto negotiation, auto MDI/MDIX, HOL blocking prevention and flow control (IEEE 802.3x).