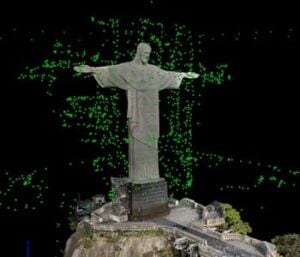 Aeryon Labs and Pix4D have collaborated to construct the first accurate 3D model of the Christ the Redeemer statue in Rio de Janeiro. Pix4D were originally contacted by the NEXT Lab of the Pontifical Catholic University of Rio de Janeiro to determine if a 3D reconstruction could be achieved using both image processing technology and Unmanned Aerial Vehicles (UAVs) for data acquisition, and the Aeryon quad-rotor aerial platform was chosen as the operational UAV.

The Christ the Redeemer statue is Brazil’s most important monument. Located atop the 700 meter Corcovado Mountain the Christ statue towers over Rio de Janeiro, at 38 meters of height and with a 28 meter arm span. Accurate 3D reconstruction has not been possible until today because technologies such as LiDAR cannot scan the complete statue due to its size, location, difficult accessibility and challenging weather conditions. All previous 3D models and replicas of the statue have been designed by hand.

“This project took years of waiting by the NEXT Lab team and many months of planning and collaboration across several time zones to pull the technologies together in Rio,” commented Dave Kroetsch, Aeryon’s President and CEO. “We are pleased to have participated and that the Aeryon UAV platform was instrumental in creating the first accurate 3D model of the Christ the Redeemer monument.”

Data was collected for six consecutive mornings, on-site in late October. The main challenges for the data acquisition were the changing weather and wind conditions, restricted hours for data acquisition (flights could only take place before and after visiting hours) and inconsistent lighting conditions (shadows in early morning and late afternoon). A total of 3,584 images were acquired during 19 ten-minute flights.

2,090 images were used in Pix4Dmapper Pro desktop software to convert them into the 3D model. The reconstruction was divided into three main projects (statue, base and surrounding area) and nine-sub-projects to help manage the variations in image capture. Signal reflectance was one of the many challenges faced and affected the geotag accuracy; as a result, the sub-projects were processed without geotags. Eighty-two manual tie points were required to merge all sub-projects, while Pix4Dmapper’s point editing tools and annotating feature were used to crop out background points, such as the sky. Finally, a linear measurement, taken onsite by the project team, was used to provide the correct scale for the final result.

“Creating the first ever accurate 3D model of such a renowned statue with our software is a great way to showcase how image processing technology can achieve results that traditional technologies haven’t been able to produce,” said Christoph Strecha, CEO and Founder of Pix4D. “With its intricate detail, the statue was also a perfect structure to test out our new 3D textured mesh.”

The final 3D model, available both as a point cloud of 134.4 million points (97.6 million for the statue, 30.7 million for the terrace and 6.1 million for the surroundings) and as a full 3D textured mesh of 2.5 million triangles with a texture of 16384px x16384px, will be used and presented by PUC University for upcoming projects in the near future.