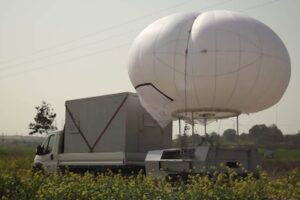 Israeli firm RT LTA, developer and manufacturer of surveillance aerostats, has recently been awarded a two year contract with the Israeli police. According to this contract, RT LTA will lease its Skystar 180 aerostats by the hour, with crew, for tasks issued by the police.

The Skystar 180 system is a small, portable aerostat, especially suited for tactical intel assignments and security operations, both military and civilian. Carrying a payload of up to 20 kilos, it provides persistent surveillance of various events, from an altitude of 300 meters. Equipped with a powerful day and night camera, this unmanned system requires only two operators, and can stay in the air continuously for 72 hours even in any weather condition.

RT LTA’s systems were used extensively by the Israeli military in “Operation Protective Edge” and “Operation Brothers’ Keeper”. Three additional systems were recently leased by the Jerusalem municipality to monitor and control violent outbursts in the city. The Skystar 180 is used for intelligence operations in 10 countries in 5 continents. Among other applications, one such system was employed last summer to secure the Fan Fest area in the World Cup games in Brazil.