Advanced UAV Lab to be Built at Imperial College London 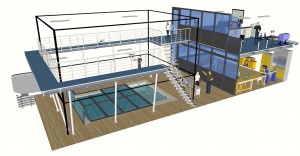 A new £1.25 million arena for flying the next generation of aerial robots will be constructed at Imperial College London, thanks to a generous donation.

The global market value of unmanned aerial robot manufacturing is expected to reach an estimated $US 89 billion in the next ten years. These robots have a range of potential applications including search and rescue, wildlife conservation and inspection and repair of industrial facilities, particularly in hazardous environments.

Imperial aims to capitalise on its position as one of the UK’s leading centres for aerial robotics research with the development of a new state-of-the-art laboratory at its South Kensington Campus.

The development of this facility is made possible thanks to a gift from Mr Brahmal Vasudevan, an Imperial alumnus. Based in Malaysia, Mr Vasudevan is the founder and Chief Executive Officer of Creador, one of Asia’s leading private equity firms.

The Brahmal Vasudevan Aerial Robotics Lab will consist of a two storey laboratory and workshop, hosted by the City and Guilds building, on its roof. It will have teaching facilities for undergraduates and postgraduates, housing a workshop for manufacturing aerial robots and an enclosed arena for safely carrying out test flights. It will also be one of only a handful of facilities in the world that will be able to test hybrid aerial robots that can fly and then dive into water, which could be beneficial in the future for search and rescue missions.

Professor Alice Gast, President of Imperial College London, said: “Aerial robotics has a tremendous range of applications, and Imperial is well-equipped to play a pivotal role in this nascent industry. Brahmal Vasudevan’s generosity and vision will allow our students, academics and industrial partners to rapidly advance research and innovation in this exciting field.

The Brahmal Vasudevan Aerial Robotics Lab will showcase Imperial’s outstanding abilities and inspire future aeronautical engineers. We are fortunate to have engaged alumni who support the student experience and keep us at the forefront of discovery.”

Professor Jeff Magee, Dean of the Faculty of Engineering, said: “The Brahmal Vasudevan Aerial Robotics Lab will be a focal point for our aerial robotics research and education activities. We also want this facility to be a place for prospective students and school children to visit, inspiring them to become future aeronautical engineers.”

Dr Mirko Kovac, Director of the Brahmal Vasudevan Aerial Robotics Lab added: “Aerial robotics has the potential to become an important industry in the UK, but we need world-beating teaching and research infrastructure to make this a reality. Thanks to the support of Mr Vasudevan we will now be able to construct an outstanding facility, which will enable the College to consolidate its position in this field and foster the next generation of engineers. Ultimately, we are aiming to develop flying robots that could improve the way companies do business, save lives and help to protect our environment.”

The flight arena will include the latest technologies, such as sixteen high speed 3D aerial tracking cameras that will wirelessly control how the robots will fly and also record their flight dynamics, which will be fed in real-time back to computers. A further eight 3D tracking cameras will be positioned in a water tank, which will be used to test the combination aerial robots as they dive into and swim through the water.

The Brahmal Vasudevan Aerial Robotics Lab will also bring the testing facilities into closer proximity with manufacturing facilities at the College. These workshops have 3D printers and laser micromachining equipment, which is used to fabricate components, making construction of the aerial robots more efficient. The new location is also expected to lead to more and varied collaborations between people across different scientific and engineering disciplines at the College and across the UK.

Construction of the Brahmal Vasudevan Aerial Robotics Lab will begin in 2016.