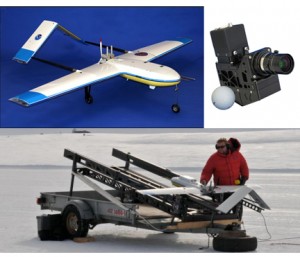 Headwall Photonics has delivered two high-performance hyperspectral imaging sensors to Columbia University as part of its Air-Sea-Ice Physics and Biogeochemistry Experiment (ASIPBEX). ASIPBEX is part of a larger international collaborative investigation of Climate Cryosphere Interaction with colleagues from Spain, Germany and Norway. This crucial remote-sensing project funded by the Gordon and Betty Moore Foundation will use a high-endurance unmanned aircraft system (UAS) to investigate climatological changes present in the Arctic Ocean around Svalbard, Norway. The NOAA Pacific Marine Environmental Laboratory will operate the UAS known as the Manta. The instrument payload comprises two Micro-Hyperpsec sensors; one will cover the Visible-Near-Infrared (VNIR) range of 400-1000nm while the other will cover the Near-Infrared (NIR) range of 900-1700nm. Together, the sensors will be crucial in detecting indicators of sea ice physics, solar warming and global carbon cycles.

“We chose the Headwall sensors for several reasons,” stated Christopher Zappa, a Lamont Research Professor at Columbia’s Lamont-Doherty Earth Observatory. “The very high resolution allows us to collect and process vast amounts of spectral and spatial data upon which our research and analysis depend.” The wide field of view of the Headwall sensor combined with aberration-corrected optics also contributes to overall flight-path efficiency. “The UAS allows scientists to measure in places that typically are impossible to get to using ships or manned aircraft,” continued Zappa. “This opens up the possibility for transformative understanding of the climate system. Since we’re using a UAS, we depend on ‘seeing’ as much of the ocean surface as possible, minimizing any aberrations or unwanted artifacts along the edges of the field of view,” concluded Zappa. The combination of Micro-Hyperspec and Headwall’s advanced Hyperspec III airborne software allows for the successful collection, classification, and interpretation of the spectral data collected during each flight.

This particular deployment for the ASIPBEX project is fundamental to Headwall’s strategy of advancing the science of remote sensing aboard small, commercial unmanned aircraft systems. “Hyperspectral represents a crucial payload for any manned or unmanned deployment,” noted Headwall CEO David Bannon. “But significantly notable is that the UAS has become a ‘go-to’ platform. This means not only smaller and lighter sensors, but also integrated solutions that factor in everything from LiDAR and data-management to post-processing tasks such as ortho-rectification that our software can handle.” Because the Micro-Hyperspec sensor uses high efficiency diffraction gratings in a concentric, optical design, imaging performance and signal-to-noise are both maximized. The patented optical design provides a package that is rugged and robust for airborne use in harsh environments such as the Arctic ocean.