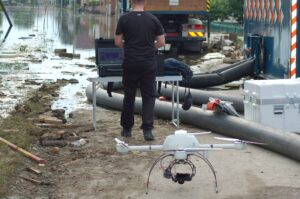 md4-1000 Quadrocopters are used following the flooding and landslides

Rescue teams have been using md4-1000 Quadrocopters, developed by Germany-based microdrones GmbH, following recent flooding and landslides in Serbia and Bosnia-Herzegovina. The UAVs have helped in the search for survivors and landmines which have been brought to the surface.

The Belgian Royal Military Academy (RMA) onducted around 20 flights over a two week period. “We’ve provided the other rescue teams with damage reports, detailed maps and pictures of the disaster region – the goal being to locate the countless landmines left over from the civil war.” notes Haris Balta.

New rescue methods save lives
The city of Orasje in northeast Bosnia was particularly hard hit by the flooding. Thousands of people lost their homes and many were cut off from the outside world. Initial attempts to pump water out of the area proved fruitless, and the local situation barely improved at all. A breach in a levee that was making pumping operations impossible was not discovered until a drone deployed by the Belgian military’s Belgian First Aid and Support Team (B-FAST) detected it.

Landslides in and around the city of Maglaj shifted whole minefields, making it impossible for people to move around safely; and deploying rescue teams to this zone would have been too risky. Detailed aerial 3D photographs were then taken, which helped to measure how far the minefields had shifted – mines were found up to 23 kilometers away from their original location. In this case, airborne support provided invaluable assistance for deployment in the disaster zone. “A two-hour drone sortie saved the rescue team three days,” the on-site B-FAST team noted.

Severe challenges owing to difficult terrain
The inaccessible terrain in the flooded areas posed a problem for the rescue teams, and was also a particular challenge for the drones. It was essential that they be able to fly for lengthy periods and operate in narrow areas. The md4-1000 Quadrocopters used in this case are easy to maneuver or can even fly over waypoints without a pilot, for up to 88 minutes at a stretch.

These aircraft are part of two different EU projects. Under the ICARUS project, tools were developed that are intended to help rescue teams locate survivors – including through the use of drones, as well as unmanned ground and amphibious vehicles. The solutions developed by the TIRAMISU project, on the other hand, are designed specifically for landmine searches. The Quadrocopters proved particularly useful for both projects, under challenging conditions.

UN drone deployment
Having evaluated the successful deployment of German drones under the ICARUS and TIRAMISU projects, the UN is now also using md4-1000 drones. In Bosnia and Croatia, detailed aerial photographs are again providing landmine search teams with invaluable support. According to Haris Balta, “So many local officials and end-users have acknowledged the helpfulness of the missions to date (which were carried out right after the flooding) that they have asked us to support the UN’s new missions as well.” Thanks to the drones, considerably more precise and rapid assistance can be provided to disaster victims, particularly in difficult to access areas or areas that are hazardous owing to the presence of landmines.