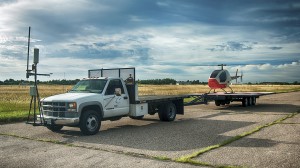 The SA-400 Jackal VTOL aircraft lands on the moving trailer

The SA-400 Jackal landed smoothly on a 16ft x 20ft trailer being towed along a runway at speeds up to 10 knots. More than 10 landings and takeoffs were performed including straight-line approaches and 45-degree approaches to simulate ship-based operations. This is a significant milestone towards demonstrating the ship-based takeoff and landing capabilities of the optionally piloted helicopter.

“Scion landed on a smaller deck and accomplished the entire project at a fraction of the cost of competing systems”, said Colonel Sanford D. “Sandy” Mangold (USAF, Retired).

“Capabilities like this used to be limited to large defense contractors. We’re very proud of what our small team in Colorado has accomplished!” said Steen Mogensen, CEO of Scion UAS.

The safety pilot, Jim Sampson, was on board the aircraft during the flight tests for situational awareness and to ensure compliance with FAA regulations. The SA-400 is capable of flying fully unmanned or as an optionally piloted helicopter.

The SA-400 Jackal is a turbine powered VTOL aircraft designed to carry a 100-pound payload for more than four hours. The first two SA-400 Jackal systems are being delivered to the Naval Research Laboratories, where the vehicles will be used in the development and demonstration of emerging sensor systems.

Mr. Al Cross, Head of the Vehicle Research Section at NRL commented, “This is a major achievement which demonstrates that a small company can push the state-of-the-art in VTOL UAS development on an austere budget. I am very proud of what Scion UAS has accomplished today and look forward to accepting the SA-400 vehicles into the NRL research vehicle inventory.”