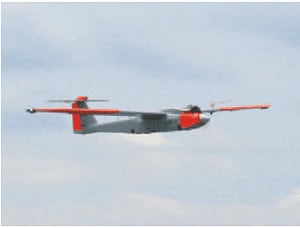 Tests were conducted over restricted airspace in the state of New Jersey. A joint team from Applanix and AAAI planned and flew a sequence of missions to evaluate the capabilities of the UAS. These include, critically, the ability to provide highly accurate, directly georeferenced and orthorectified aerial imagery without the need for ground control points or aerial triangulation calculations. The system, consisting of the airframe, its avionics, mobile ground control station and the digital mapping payload, performed according to expectations and successfully produced high quality imagery.

David Yoel, CEO of American Aerospace Advisors, commented: “Performing safe and successful missions with long endurance unmanned aircraft in civilian airspace are a challenge that goes far beyond selecting the right aircraft and payload. Working with Applanix, we have produced an integrated system that is designed from the ground up with civilian mapping operations in mind. We believe this system has the capability to transform the aerial mapping industry.”

The RS-16 DMS is a complete, operational system capable of conducting large area operations within the National Airspace System in the United States, and in other jurisdictions as local regulations allow. Within the USA, AAAI is engaged with several of the recently announced UAS research and test sites, which operate under the auspices of the FAA to develop the certification and operational requirements necessary to safely integrate UAS into the national airspace.

The GNSS-Inertial systems at the core of Applanix’ DMS-UAV aerial mapping payload uses commercial inertial technologies that are offered globally.

Joe Hutton, Director of Inertial Technology and Airborne Products at Applanix, added: “The market for airborne imaging systems is in a state of rapid change. Developments in imaging technology, in processing capability, and in the nature of inertial sensors, make a directly georeferenced UAS a reality today, where it would have been inconceivable even a few years ago. Our ability to take our established market-leading manned solutions, and integrate the technology successfully into an unmanned platform, speaks volumes for the engineering expertise of Applanix and AAAI.”