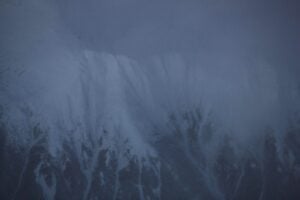 Image of a snow covered mountain taken from a high resolution camera on the NASA Global Hawk during a nighttime flight over the Canadian Arctic.

The Global Hawk was equipped with an Uninhabited Aerial Vehicle Synthetic Aperture Radar (UAVSAR) as well as a high resolution camera to conduct ground mapping and visual observation of Arctic ice caps during the approximately 21-hour flight. Information collected during this flight will be used by American and Canadian scientists to study changes in topography and Arctic ice caps.

“Flying high and long missions with advanced scientific equipment over the Arctic provides scientists with real data to better understand the changes that are affecting our world,” said Janis Pamiljans, Northrop Grumman’s sector vice president and general manager of unmanned systems. “The high-altitude, long-endurance NASA Global Hawk is one of the best tools researchers have to study weather phenomena.”

This flight marks the first time the NASA Global Hawk has flown through Canadian civil airspace. Global Hawk’s high-altitude, long-endurance capabilities enabled the aircraft to depart from NASA Dryden, based at Edwards Air Force Base, Calif., and fly over several predetermined key areas in the Arctic before returning to NASA Dryden.

The flight over the Canadian Arctic comes after the recent five-year renewal of the Space Act Agreement, a partnership between Northrop Grumman and NASA that allows sharing of NASA Global Hawks for science missions and flight demonstrations. The initial Space Act Agreement, signed in 2008, returned two preproduction Global Hawk aircraft to flight status. A permanent Global Hawk ground control station was built at NASA Dryden.

Image of a snow covered mountain taken from a high resolution camera on the NASA Global Hawk during a nighttime flight over the Canadian Arctic. These images will be used by American and Canadian scientists to study environmental changes in the Arctic.