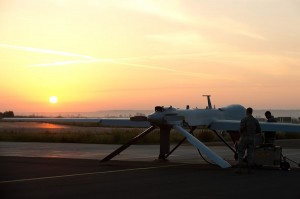 The RPA program began in the mid-1990s. It took 16 years for the community to reach 1 million hours and a mere two and a half years to double those flight hours.

“There is just no way to describe what an amazing event that was,” said Col. James Cluff, the 432nd Wing/432nd Air Expeditionary Wing commander. “The community really had some very humble roots flying out of what used to be Indian Springs Air Force Auxiliary Field here almost 20 years ago.”

Although it was a crew from Creech Air Force Base to actually fly the mission that reached the 2 millionth flight hour marker, it is was a team effort that made the mission possible.

“Air Force Special Operations Command, Air Force Materiel Command, 480th Intelligence, Surveillance and Reconnaissance Wing, our guard and reserve partners, and many others all contributed to this – not just the 432nd Wing or Air Combat Command,” Cluff said. “The whole team is represented here by this amazing achievement, and we couldn’t be prouder.”

Lt. Gen. John Hesterman, the commander of the U.S. Air Forces Central Command in Southwest Asia, noted the importance of RPAs and said it’s the men and women of the community who have helped achieve such great success over the years.

“The fact that commanders have had this ISR and precision-strike capability from remotely piloted aircraft when and where they have needed it for so long is a remarkable milestone, and should be noted,” Hesterman said. “But perhaps the bigger story and true achievement has been the unwavering dedication of the men and women who have made this capability available for such a sustained period of time. They have saved lives and made us and our coalition partners safer and more secure.”

Chief Master Sgt. Butch Brien, the 432 Wing/432nd AEW command chief, noted the dedication of the Airmen, both past and present, behind the mission is unmatched.

“People are going to be talking about us for years and years to come – it’s great to be part of this elite team,” Brien said. “I think about the 24/7, 365 operations capability that we have working with our partners across the United States and overseas making this happen, and how advanced the technology has become since the beginning … what we’re achieving right now, you can’t touch that.”

“The decision was based on several things such as qualifications, merit, and experience,” said Capt. Ben, an 18th Reconnaissance Squadron RPA pilot who flew the 2 millionth hour mission. “We are continuing a legacy of flying of all the RPA pilots and sensors before us. However, it’s a combined ‘one team, one fight’ effort. We depend on our counterparts like communications, maintenance, launch and recovery teams, and other RPA Airmen to be able to conduct and complete our missions.”

Staff Sgt. Tabitha, a 18th RS mission intelligence coordinator, said the community has experienced an increase in the number of combat air patrols over the years but the dedication of the team is what makes the difference.

“Even though it’s been hard, we’ve always found a way to meet the increasing demands,” she said.

Senior Airman Travis, a 18th RS sensor operator, gave one piece of advice for all the Airmen who play a part in keeping the mission capabilities going.

“Stay flexible,” he said. “At one point I was flying eight hours each day for nearly three months, but the flexibility and dedication of our people makes anything possible.”

Although the aircrew members are the ones flying the planes, there are hundreds of people involved every day in RPA operations.

“There is really nothing ‘unmanned’ about RPAs, other than the fact that there isn’t a pilot in the cockpit,” said Maj. Gen. John Shanahan, the Air Force ISR Agency commander. “From the maintenance personnel, to the pilots and sensor operators, to the communications experts, to the ISR professionals who exploited every signal and every second of every video, this is a team business. I am incredibly proud of the Airmen across the Air Force ISR Agency who have been involved in the RPA success story since day one. They take information from the RPAs and turn it into intelligence that allows someone to make a better decision – in peacetime and war.”

Achieving such great heights commemorates more than just a proud moment, it also demonstrates how valuable the program has become in just two decades.

“I carried the first Predator to Tazar, Hungary, in 1996 at the direction of Secretary of Defense William Perry,” said retired Maj. Gen. Kenneth Israel. “Dr. Perry’s guidance was ‘if Predators save one soldier’s life, they are worth deploying now.’ No one could have envisioned the unprecedented success these systems have had during the last two decades.”