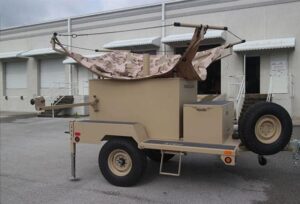 The NIE is a series of semi-annual, soldier-led evaluations designed to further integrate, mature and rapidly progress the Army’s tactical communications network. NIE 14.1, the sixth in the series of semi-annual field exercises, will focus on balancing the live, virtual and constructive mix of communications to achieve a higher-quality evaluation of existing and prototype products in a cost-constrained environment. NIE serves as a principal driver of change in the Army — such in-field evaluation and integration events drive requirements, field recommendations and procurement.

Earlier this year, LTAS delivered two complete, trailer-mounted aerostat launcher systems to the SMDC Battle Lab, who referred to them as the Winch Aerostat Small Platform (“WASP”). The WASP is a self-contained tactical aerostat that provides enhancements where existing systems are limited, particularly in complex terrain. The WASP system is designed to elevate a secure communications package to increase communications coverage, reduce the need to position retransmissions forward, and enable operational dispersion.