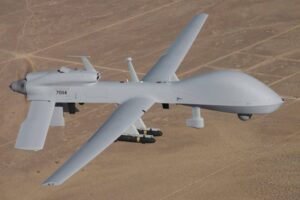 “This first endurance flight is a significant accomplishment for Improved Gray Eagle as it demonstrates the aircraft’s game-changing potential for saving the lives of Army Soldiers abroad by providing extended surveillance coverage, along with the ability to self-transit to other remote distant locations,” said Frank W. Pace, president, Aircraft Systems Group, GA-ASI.

IGE was developed by GA-ASI on Internal Research and Development (IRAD) funds to demonstrate the increased endurance potential and higher payload capacity with minor modifications to the existing Block 1 Gray Eagle platform. The Army Unmanned Aircraft Systems Project Office is supporting testing of the aircraft by funding two demonstration flights this year that are designed to validate the enhanced capabilities. The first endurance test was performed with the aircraft in a Reconnaissance, Surveillance, and Target Acquisition (RSTA) configuration. During the second demonstration, which is planned for later this year, IGE will carry a wing-mounted external payload and weapons.

IGE has a Max Gross Takeoff Weight (MGTOW) of 4,200 pounds, utilizing the 205HP Lycoming DEL-120 engine. Gray Eagle has a GTOW of 3,600 pounds with a 160HP rated engine. IGE’s deep belly design and 500-pound centerline hard point allows for 850 pounds of internal fuel load, with an optional external fuel pod that can accommodate an additional 450 pounds (Gray Eagle’s fuel load is 575 pounds). Use of this extra fuel would allow for RSTA missions in excess of 50 hours.