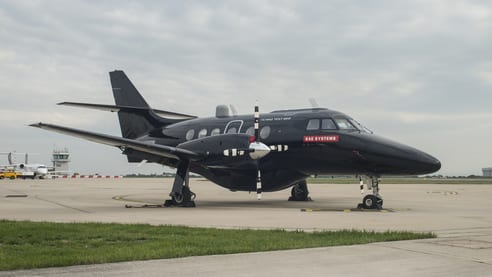 The BAE Systems Jetstream aircraft, dubbed the ‘Flying Test Bed’, has undergone maintenance activity to prepare it for a series of flight trials which will take place before the end of the year.

Jetstream is an aerial laboratory with equipment to allow it to fly as a pseudo unmanned air vehicle (UAV), piloted from the ground.

Jason Lydon, the Aircraft and Flight Trials Manager, said: “[Jetstream] underwent a mandatory five-week maintenance activity with Cranfield Aerospace where emergent defects were rectified and to have a new storage cabinet installed inside. Then it went to Hamilton Aircraft based in Edinburgh for the repaint; it got rubbed down, primed and repainted with new lettering put down the side.”

The aircraft is planned to undertake flight trials before the end of the year which will look into the development of weather hazard avoidance, navigation and gathering data on emergency landing, for Unmanned Air Systems. The results of the trials will feed into an ongoing programme spearheaded by BAE Systems’ Research and Technology arm.

As with all flights by the Jetstream, there will be two pilots in the cockpit who will be able to take command of the aircraft at any point, if required.

Since 2006, the Jetstream has led flight trials for the £62m ASTRAEA programme, led by a consortium of seven companies including BAE Systems, which aims to enable the routine use of unmanned aircraft in airspace without the need for special conditions.

It has seen the consortium working alongside the regulator, as well as service providers such as the National Air Traffic Services (NATS), to try and secure flights for unmanned aircraft in controlled airspace alongside other users.

In April 2013, it saw the aircraft complete a 500-mile flight from our Warton site, Lancashire to Inverness, Scotland, under the command of a ground-based pilot and the control of air traffic controllers from NATS.