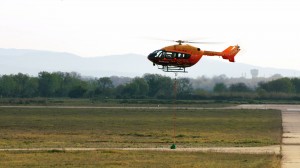 AeroVironment, Inc., the world’s highest volume manufacturer of unmanned aircraft systems (UAS), and Eurocopter, the leading global helicopter manufacturer, announced at the Association of the United States Army annual meeting that they have signed a cooperative agreement to explore opportunities for expanding their respective military and commercial product portfolios.

AeroVironment developed the first hand-launched unmanned aircraft for military surveillance in 1987. Since that time, the company has won every U.S. Department of Defense competition for small UAS programs of record, and has delivered more than 20,000 new and replacement small unmanned air vehicles to customers within the United States and to more than 20 international governments. The company has also integrated its secure Digital Data Link communications architecture into air, sea and land vehicles, including manned and unmanned airplanes and helicopters, to enable control of its UAS from those platforms and provide access to the information they produce.

Eurocopter offers the most comprehensive civil and military helicopter range in the world, with more than 11,780 rotorcraft in service across 148 countries. Overall, Eurocopter helicopters account for 33 percent of the worldwide civil and parapublic fleet.

The company’s expertise in system development and integration is applied across its current helicopter products to ensure their mission flexibility and operational effectiveness, with additional advances being developed for the next generation of rotorcraft that will provide new levels of performance and efficiency.

Eurocopter’s ability to integrate unmanned flight capabilities into its helicopter family was validated this year by an optionally piloted vehicle (OPV) demonstration program, which used an unmanned EC145 to fly routes that included deployment of an external sling load and a representative observation mission.