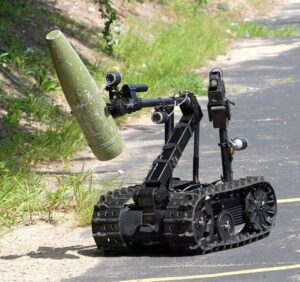 QinetiQ North America (QNA) today announced it is being awarded a $20 million, firm-fixed-price contract for its TALON® IV military robots, spares and training. The contract will support foreign military sales to Iraq.

The TALON IV robot provides the Iraqi military’s explosive ordnance disposal technicians with a man-transportable capability to remotely perform reconnaissance and IED detection. Work will primarily be performed in Waltham, Mass., as well as Iraq, and is expected to be completed by March 2014.

“We are proud to provide the Iraqi military with additional TALON IV robots to keep their military, first responders, and civilians safe from the extreme dangers caused by improvised explosive devices (IED),” said JD Crouch, Chief Executive Officer, QinetiQ North America. “TALON is a premier counter-IED robot in use in countries across the globe, to detect tens of thousands of IEDs and save countless lives.”

With more than 4,000 of these life-saving robots in use today, TALON continues to be the robot of choice for counter- IED missions, police operations and hazmat missions both domestically and internationally.

From the rugged TALON® and Dragon Runner™ robots to the Spartacus™ and Raider™ unmanned vehicles, QNA offers a full range of durable, reliable and flexible unmanned systems weighing from 10 to 12,500 pounds. QNA’s family of robots includes small, medium and large unmanned vehicles that can be configured for specific tasks such as IED detection, CBRNE/hazmat detection and identification, reconnaissance, combat engineering and SWAT/MP unit assistance. Whether the mission is supporting a bomb squad protecting life and property in an urban environment or a dismounted warfighter assessing threats, QNA’s robots deliver.

Operating as the U.S. component of QinetiQ’s Global Products division, QNA’s Technology Solutions business unit is a world leader in robotic technology solutions that save lives in defense, security and first responder environments.