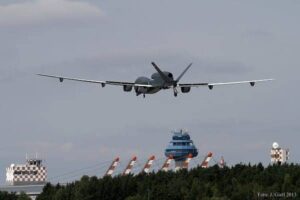 With a wingspan greater than most commercial airliners, EURO HAWK® can fly at altitudes more than 60,000 feet for more than 30 hours. It can detect radar and communication emitters with its advanced signals intelligence sensors and updated payload software.

“This is the longest flight flown in European skies by an unrefuelled UAS in the more than 30,000-pound [14,600-kilogramme] class,” said Rolf Wirtz, head of Mission Systems, Cassidian’s UAS branch. “The EURO HAWK® has performed safely and reliably with good results throughout its entire flight test programme. It is the only system that can meet Germany’s requirement for high-altitude signals intelligence surveillance missions.”

On June 6, the EURO HAWK® flew over the North Sea for the first time, soaring throughout Germany before returning 6.5 hours later to Manching Air Base.

EURO HAWK® is an interoperable, modular and cost-effective replacement to the retired fleet of manned Breguet Atlantic aircraft, which was in service from 1972-2010. The flight test phase is currently scheduled through September 2013.