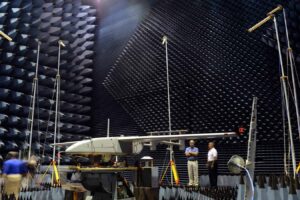 Tests were conducted on the Aerostar unmanned aircraft

From July 10 to 24, the Communications and GPS Navigation Program Office (PMW/A 170) , headquartered in San Diego, mounted a Small Antenna System (SAS) on an Aerostar unmanned aircraft, then placed the small UAV in a room lined with signal-absorbent material at the FARM (Facilities for Antenna and RCS Measurements), where it was subjected to GPS jamming signals.

Equipped with model jammers, the FARM facility was used as a stage for the “enemy” to jam the GPS signal and try to knock the UAV off course, said Eric Stevens, the Unmanned Aircraft Systems Communications and Navigation lead for PMW/A-170, which supplied the antenna system. Knocked off course, the UAV would not be able to relay critical intelligence back to the ground control station — disrupting communications among U.S. and allied forces’ ships, aircraft and submarines. In a worst-case scenario, GPS jamming could even cause UAVs to crash.

“If an enemy is trying to jam, or interfere, with the GPS frequency, this antenna allows us to be able to track and acquire the true GPS satellites even in the midst of this jamming and interference,” Stevens said. “What we are doing is demonstrating and quantifying the value of this antenna on small UAVs.”

Personnel involved in the testing were optimistic about the results.

“We are hoping to gain some ground and show there are smaller GPS protection solutions out there,” said Michelle Jackson, an electronics engineer with experience in testing SAS systems on other platforms.

Equipped with the SAS, the Aerostar will be also used to support a U.S. Army pre-deployment war-game scenario conducted at Fort Polk, La., in August, said Donn Rushing, the project lead for MUDO. Rushing participated in the Fort Polk exercises last year and said the addition of the GPS anti-jamming antenna will give the “good guys” an edge this year.

“This new anti-jam system decreases the footprint normally required of such a system, which is now ideal for UAV incorporation and service,” Rushing said. “What makes us smarter is knowing our enemies are smart and that we have to stay one step ahead of them. The SAS development is the latest GPS anti-jam capability to aid the war fighter in combating the bad guys.”