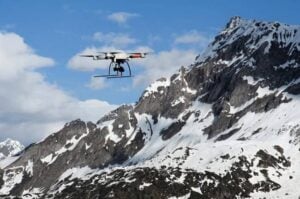 On 12th June, a microdrones md4-1000 drone equipped with an HD camera set off from Switzerland and crossed the Saint-Gotthard Massif to Italy. The complex record flight, which took almost 25 minutes, was monitored and documented by a professional stunt and film team. Helicopters and many cameras accompanied the md4-1000 on its journey over the Alps.

“Such a flight is a very complex challenge for a remote-controlled quadrocopter, which requires a long flight time, precision and durability from the microdrone. There are many unpredictable factors. That’s why nobody has had a go at this experiment yet,” explains microdrones CEO Sven Juerss, member of the ground crew, who accompanied the md4-1000 with a Mercedes-Benz SL and GL 63 AMG. “It makes me incredibly proud that we were actually able to do it”, says Juerss shortly after completing the record-flight.

Over 1,600 meters height differences
The md4-1000 flew fully automatically across the entire distance of around 12 kilometres in GPS waypoint mode and avoided power and telephone lines as well as a cable car. To complicate things, it also faced various severe weather conditions in the form of sun and snow influences as well as differences in altitude of more than 1.600 metres. “The varied route will give us fantastic recordings,” reports Juerss. “At one point it was very close. We underestimated the snow at the peak and had to correct the flight path under great time constraints – it nearly turned into a sleigh ride.”

The strong wind also presented a further, almost unpredictable obstacle which became even more intensive due to the temperature differences. “The cold wind practically fell down the mountain on the south side – it’s a bit like doing a halfpipe on a skateboard – except that that skateboard is remote-controlled,” says Juerss.

The experiment was fastidiously prepared several months beforehand: the route was precisely measured and divided into 18 waypoints, obstacles had to be documented and mapped.

Many companies took part in the preparation and realisation of the project: Daimler AG, for example, made Mercedes-Benz vehicles available. Sony Deutschland, Carl Zeiss AG and the hardware and software developer u-blox also supported the remarkable endurance test.

International experts
“We had a fantastic team here without whom this experiment would not have been possible,” says Juerss. Five flight operators for the launch, ground, air, landing and waypoints monitored the pre-programmed flight. In order to precisely document the record and to produce the best possible pictures, microdrones specially flew in a professional stunt and film crew from the USA. The action professionals, who are usually booked for major blockbuster productions, were impressed by their small, remote-controlled colleague. The team was rounded off by professional operators for the md4-1000, precision drivers and engineers.

microdrones had already set a record at the start of 2012 when the company used a film to document the fact that the md4-1000 can hover in the air for a duration of 88 minutes without outside influences. Juerss explains: “These endurance tests are very important. It is often forgotten that microdrones are often used to help in catastrophes or to further science. And in such cases, endurance, durability and reliability are of paramount importance.”