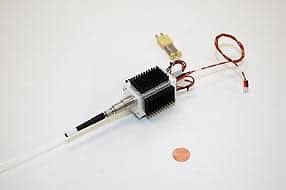 LaserMotive, an independent company specializing in delivering electric power via lasers, has unveiled InvisiTower, the world’s first tethered vertical take-off and landing (VTOL) aircraft system powered by laser over optical fiber. The new, portable system can power any multi-rotor helicopter indefinitely using laser power sent via fiber optic cable, enabling aircraft to stay in the air as long as power is available on the ground.

The first public flight of an aircraft powered by the new system will take place this week at the SPIE Defense, Security & Sensing (DS&S) tradeshow at the Baltimore Convention Center in technical demonstration booth T2 and booth #1970.

InvisiTower enables any helicopter to stay in the air as long as power is available on the ground. The system is compact and portable (small enough to fit in the back of an SUV) and does not require a pilot to fly — just someone to monitor the video coming from it.
At DS&S, LaserMotive will be demonstrating InvisiTower powering a small quadrocopter, which will fly each day of the tradeshow.

“The beauty of the InvisiTower system is that it allows unlimited flight even in small systems because fiber optics are much lighter than copper wires,” said Tom Nugent, president and CEO of LaserMotive. “In addition, it is safer because the fiber cable is nonconductive — it won’t conduct lightning or short out power lines — and no high voltages are needed. The laser energy is completely contained, and interlocked in case the cable is damaged, so there are no laser safety issues.”

InvisiTower can be used for a variety of applications in both the military and civilian markets including: ISR and situational awareness, communications relay, news & sports reporters, first responders, and industrial facility security.

InvisiTower is based on LaserMotive’s Power over Fiber system announced earlier this year, which takes LaserMotive’s free-space laser power beaming systems that have set multiple records delivering power to mobile robots and UAVs and sends the laser light over optical fiber. Power over Fiber can deliver power over long distances safely and without interference in the presence of high voltages, RF fields and electromagnetic pulses, or strong magnetic fields.