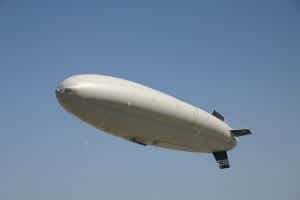 The T-C350 is an aerial surveillance platform loaded on an aerostat. It can lift a 200 kg payload. Its integrated multi-sensors system consists of an EO/IR camera with a 27 km range and a GMTI radar with a 125 km range, covering a total area of 50,000 km². This system is thus adapted to a large variety of missions, including sensitive sites, events, border areas, urban areas, and FOB.

Consisting of a 350 m3 balloon, moored with a cable to an adapted ground station, the T-C350 can be deployed to an altitude up to 3,000 feet. It is operational with a wind speed up to 110 km/h. Live data transmission is accomplished by a fiber-optic communication system. Power supply in ensured by a system of solar panels located on the envelope, allowing a very long endurance.

The T-C350 can be deployed and operated by a two-person team. Its total endurance is up to 40 days for a very low operational cost. With its mobile ground station, it can be deployed on any kind of terrain.

Gilles Joubert (PhD), A-NSE R&D Director and a computer simulation specialist, has supervised the flight tests: “The tests complied with our customers’ specifications. Our R&D department facilitated the deployment of the system by their work. The innovative shape of the envelope gives the aerostat a great stability, even with strong winds.”

This surveillance system will be deployed in the Middle-East for industrial sites surveillance, starting in the month of June.

Airborne surveillance systems loaded on aerostats are innovative solutions and have a promising future. Colonel Campbell (US Army) recently said that this kind of system “helps us to keep an eye on all the enemy activities. Being able to see them and watch what they are doing even before we get there is going to give us a real tactical advantage. It does not only force protection but we consider it also as an intelligence surveillance and reconnaissance asset. So it helps us to keep track of where the enemy is going, what he is doing, what its movements are, etc.”

An innovative and cost-effective solution for aerial surveillance The U.S. Army has deployed more than a hundred aerostats in Iraq and Afghanistan since 2004 to support its troops, particularly via the RAID and PTDS programs.

A dozen of tethered balloons are also used by the U.S. authorities in the TARS program, for the U.S.-Mexico border monitoring and narcotics operations in Florida straits. This project was implemented in the late 1990s and has been extended ever since thanks to its efficiency.

The Israeli Army has similarly been using aerostats for aerial monitoring of the Gaza Strip.