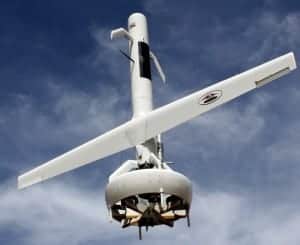 MLB Company, a leader in low-cost Unmanned Aerial Vehicle (UAV) solutions, services and products, has announced that it has concluded a DARPA funded research project to demonstrate precision autonomous delivery and placement of payload using its vertical take-off and landing UAV, the V-Bat.

The V-Bat has the performance of proven fixed-wing designs, with the flexibility of vertical take-off and landing capabilities. MLB’s V-Bat can be launched and recovered in a 20×20 foot area and still fly long distance up to 90kts for 10 hours.

“This is an excellent example of the flexibility and capabilities a vertical take-off and landing V-Bat can provide,” said Dr. Stephen Morris , CEO and Founder of MLB. “The V-Bat is ideal for shipboard operations, aerial patrol, payload pick-up and delivery or any application that requires access to hard-to-reach or dangerous locations.”