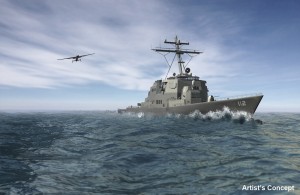 Effective 21st-century warfare requires the ability to conduct airborne intelligence, surveillance and reconnaissance (ISR) and strike mobile targets anywhere, around the clock. Current technologies, however, have their limitations. Helicopters are relatively limited in the distance and flight time. Fixed-wing manned and unmanned aircraft can fly farther and longer but require either aircraft carriers or large, fixed land bases with runways often longer than a mile. Moreover, establishing these bases or deploying carriers requires substantial financial, diplomatic and security commitments that are incompatible with rapid response.

To help overcome these challenges and expand DoD options, DARPA has launched the Tactically Exploited Reconnaissance Node (TERN) program. Seeking to combine the strengths of both land- and sea-based approaches to supporting airborne assets, TERN envisions using smaller ships as mobile launch and recovery sites for medium-altitude long-endurance (MALE) fixed-wing unmanned aircraft (UAVs). Named after the family of seabirds known for flight endurance – many species migrate thousands of miles each year – TERN aims to make it much easier, quicker and less expensive for DoD to deploy ISR and strike capabilities almost anywhere in the world.

“It’s like having a falcon return to the arm of any person equipped to receive it, instead of to the same static perch every time,” said Daniel Patt, DARPA program manager. “About 98 percent of the world’s land area lies within 900 nautical miles of ocean coastlines. Enabling small ships to launch and retrieve long-endurance UAVs on demand would greatly expand our situational awareness and our ability to quickly and flexibly engage in hotspots over land or water.”

To familiarize potential participants with the technical objectives of TERN, DARPA will host a Proposers’ Day on Tuesday, March 20, 2013, in the DARPA Conference Center. For details, visit: http://go.usa.gov/2gxJ. Registration closes on Wednesday, March 18 at 12 p.m. ET.

DARPA seeks proposals that would design, develop and demonstrate a MALE UAV and an associated automated launch and recovery system. The UAV would have to carry a 600-pound payload and have an operational radius of 600 to 900 nautical miles from its host vessel. The launch and recovery system would have to fit Littoral Combat Ship 2 (LCS-2)-class ships and other surface combat vessels as feasible.

DARPA plans to roll out TERN in three phases over approximately 40 months, culminating in a full-scale launch and recovery demonstration.

“We’re trying to rethink how the ship, UAV and launch and recovery domains – which have traditionally worked in parallel – can synergistically collaborate to help achieve the vision of base-independent operations for maritime or overland missions,” Patt said.