US Army Divisions Will Deploy With 12 Gray Eagle UAVs 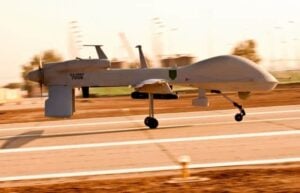 The Army plans additional Gray Eagle units, one for each of 10 active-duty divisions, and several more for special operations units, aerial exploitation units and the National Training Center at Fort Irwin, Calif.

With the current program of record, a purchase of 152 Gray Eagles in total, the Army won’t have enough of the aircraft to give a full assignment of 12 aircraft to every one of the divisions it plans on equipping; so some may get as few as nine aircraft. But when those units go downrange, they will get a full component, Army aviation officials said.

“The plan is, when a Gray Eagle company deploys, like we have downrange now with F-227 (Aviation), they would deploy with a full complement of three platoons of four aircraft, or 12 aircraft total,” said Col. Timothy Baxter, project manager, Unmanned Aircraft Systems, during a media roundtable, Feb. 4.

Those extra aircraft would come from other units who are not deploying.

“[U.S. Army Forces Command] would task organize from other Gray Eagle companies to make sure when they are deployed in harm’s way, they would have a full 12,” said Jeff Crabb, deputy product manager, Medium Altitude Endurance UAS. “That’s the current strategy.”

The direction to equip the combat aviation brigades within all Army divisions with the Gray Eagle came from Chief of Staff of the Army Gen. Raymond T. Odierno. But the Army plans to buy 152 of the aircraft to distribute among those units.

“The only way you could do that without buying more assets is to reduce the numbers,” Crabb said.

The Army has so far procured just over 25 Gray Eagle aircraft.

Today, the Army has one Gray Eagle company already deployed, Company F, 227th Combat Aviation Brigade, or CAB, 1st Cavalry Division, Fort Hood, Texas. While deployed in Afghanistan, it is assigned to the 101st Airborne Division (Air Assault). Company F, 227th CAB is equipped now with 12 aircraft, and will retain all 12 when it returns home sometime within the next two months. The 1st Cavalry Division also has an additional company of 12 Gray Eagle aircraft, Company E, 227th Combat Aviation Brigade.

Another company, Company F, 1st Aviation Regiment, 1st Infantry Division, Fort Riley, Kan., also with 12 Gray Eagles, will replace F-227 within the next 90 days, officials said. They now have an advance party already in theater, and are preparing to deploy soon.

Also in Afghanistan now are two “quick reaction capability” units, or QRC units, each with four Gray Eagle aircraft. Those two QRC units have been deployed since 2009. The first was deployed initially to Operation Iraqi Freedom and stayed though until the end of Operation New Dawn before moving on to Afghanistan to support Operation Enduring Freedom. The second QRC has always been in Afghanistan.

The Army is also fielding another company to the 3rd Infantry Division at Fort Stewart, Ga. And by October, another to the 160th Special Operations Aviation Regiment. The 160th may end up with two companies of 12 aircraft each.

Baxter said it’s been a “busy year” for the Gray Eagle program, which has culminated with the director of operational testing and evaluation publishing a “beyond low rate initial production” report for Gray Eagle IOT&E that was conducted last July and August.

The report “deemed us effective, operationally suitable, and meeting our survivability and force protection key performance parameters on the program,” Baxter said. Additionally, he said, a “number of recommendations” came out of the Beyond LRIP report, involving maturing tactics, techniques and procedures on the Gray Eagle program, improving training on the program, improving doctrine across the Army on the program with respect to Gray Eagle and all UAS, and also maturing the manned/unmanned teaming capabilities.