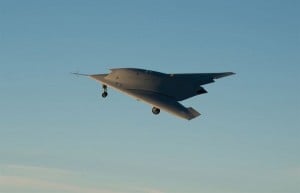 The LCR-100 AHRS provides navigation information relating to the aircraft’s position, heading and attitude. The north-finding gyrocompass feature eliminates the need for a magnetic sensing unit, similar to an inertial reference system. Additionally, the system’s precise inertial measurement unit enables extended coasting performance for the aircraft to continue providing accurate navigation information in the event of GPS signal loss. The LCR-100 is certified to civil standards for commercial off-the-shelf equipment in military platforms.

“The LCR-100 has proven that it is an efficient, cost-effective solution for unmanned aerial vehicles, particularly because of its small size and light weight,” said Eckehardt Keip, managing director for Northrop Grumman LITEF. “The system performed to our high standards and played a critical role in the nEUROn’s major milestone achievement.”

The nEUROn is an experimental UCAV being developed with international cooperation, led by France, and includes government and industry partners from Greece, Italy, Spain, Sweden and Switzerland. It is the first large stealth platform to be designed in Europe. The programme aims to develop, test and sustain key technologies for use by European manufacturers in the next generation of unmanned aerial vehicles and combat aircraft. The demonstrator will not enter serial production. However, additional flight testing, including a flight in Sweden during 2014, is expected.

Northrop Grumman LITEF is a leading supplier of inertial sensors, inertial reference and inertial navigation systems and computers with products deployed in more than 30 countries in aircraft, marine vessels and ground mobile applications. The company has more than 15,000 fibre-optic gyro systems serving in aircraft worldwide.