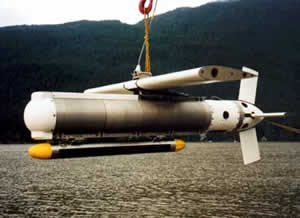 International Submarine Engineering Ltd. (ISE) is pleased to announce the award of a contract from MacDonald, Dettwiler and Associates Ltd. (MDA). ISE will provide two commercial off-the-shelf, high speed Aurora Towfish, which will be used to support mine detection missions and route survey operations for the Royal Canadian Navy’s Maritime Coastal Defence Vessels.

The Aurora towfish will include modifications to integrate new sensors and navigation equipment, including an L3 Klein sidescan sonar, and an R2Sonic bathymetric multibeam echosounder. The modular design of the vehicle makes it a simple matter to exchange sonar payloads.

The Aurora towfish has been proven as a viable component of the Royal Canadian Navy’s Route Survey system. In conjunction with the Dorado Semi-submersible Technical Demonstrator, Aurora has been used in many sea operations and evaluations since 1999. Further capabilities of Aurora were demonstrated during an evaluation in Esquimalt January 2008. There, Aurora was integrated and tested with the HMCS WhiteHorse Route Survey System Payload. Trials in Saanich Inlet, and approaches to Esquimalt Harbour demonstrated Aurora’s capability to deploy various sonar modules in operational survey conditions.

The towfish is active in the sense that it can maintain horizontal position and depth as well as avoid obstacles. Each towfish possesses its own controller. Earlier towfish have been fitted to variants of the DORADO Remote Minehunting System (RMS) for more than a decade.