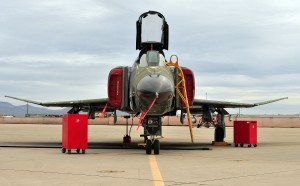 The Aerospace Maintenance and Regeneration Group is on track to finish the F-4 Phantom phase of Air Combat Command’s full-scale aerial drone program. The regenerated planes will be converted into drones to be used by several bases for target practice.

Before the F-4, AMARG worked on the QF-100 Super Sabre and the QF-106 Delta Dart. AMARG started working on the F-4 model in 2001 and have since completed 315 regenerations, while working on six to eight planes at a time.

“With the older planes there are always unexpected issues, such as fuel leaks and cracks from sitting in the desert for years,” said Rob McNichol, AMARG F-4 supervisor.

The 316th F-4 is should be completed the second week of February. The F-16 Fighting Falcon is the next scheduled model to be regenerated, and modifications are expected to start this June.