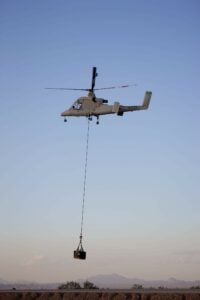 The unmanned K-MAX helicopter’s peerless ability to resupply combat troops safely, precisely and efficiently has won top honors from the prestigious magazines Popular Science and Aviation Week and has garnered high praise from the U.S. Marine Corps, which is expanding the aircraft’s role in Afghanistan.

“We are proud of the Unmanned K-MAX’s performance in supporting Marines in Afghanistan. The recognition we have received from our Marine Corps customer and other renowned organizations is a great achievement for our employees and our partner Lockheed Martin,” said Neal J. Keating, chairman, president and CEO of Kaman Corporation. “Most importantly, we are proud that Kaman Aerospace’s unique design, engineering, manufacturing and support capabilities are helping to save the lives of U.S. and allied troops in Afghanistan.”

The unmanned K-MAX is the heart of the Cargo Resupply Unmanned Aerial System (CRUAS) developed by Kaman Aerospace and Lockheed Martin to augment conventional Marine Corps ground and air resupply methods. Acquired under a contract awarded in December 2010, two of the systems began flying in southern Afghanistan in December 2011. Since then, they have carried more than 2.2 million pounds of materiel to combat forces in over 840 resupply missions. Most importantly, the unmanned K-MAX has reduced the risk of death or injury for Marines who otherwise would have had to move those supplies by manned helicopters or ground convoys.

A November 14th Marine Corps’ update describes the unmanned K-MAX system as “a combat multiplier” because of its unequalled ability to deliver cargo to troops on the ground “when weather, terrain or enemy actions pose an unsuitable risk” to manned helicopters or ground convoys.

The unmanned K-MAX’s life-saving benefits led the editors of Popular Science magazine to name it as the 2012 grand award Winner in Aerospace in their “Best of What’s New” honors, which for 25 years has recognized groundbreaking new technologies. The editors note in their December 2012 issue that, since 2008, roadside bombs and other explosive devices have accounted for more than half of U.S. troop deaths in Afghanistan. “The Kaman K-MAX, the first autonomous chopper that’s been successfully deployed in Afghanistan, removes troops from the supply delivery lines,” they write.

Aviation Week & Space Technology, one of the world’s top aerospace magazines, also has honored the unmanned K-MAX team, naming it on November 7th as winner of the 2012 Program Excellence Award for System-Level Research & Development and System Development and Design. Its editors highlight that the team was able “to execute flawlessly and deploy a critical capability just 12 months after” the aircraft were ordered.

In addition, on November 3rd the American Helicopter Museum and Education Center in West Chester, Pennsylvania honored the unmanned K-MAX team with its 2012 Achievement Award for its “innovative application of helicopter control technology to address challenging operational needs of the U.S. armed forces.”

The Marine Corps’ November 14th update says the K-MAX CRUAS’s capabilities “provide unmatched cargo delivery to the warfighter on the ground in austere environments,” adding that those capabilities and the system’s performance to date “elicited a strong endorsement” from Marine ground and logistics combat commanders in Afghanistan.

As a result, the Marine Corps has ordered the system’s third deployment there, which could extend through September 2013. The Marines re-positioned the unmanned K-MAX aircraft from the original base at Camp Dwyer (about 100 miles West-Southwest of Kandahar) to a new main operating base at the end of last year. From the new base, those aircraft will resupply more distant forward operating bases. That move will introduce the unmanned K-MAX’s capabilities to a wider population of personnel from military services of the U.S. and other nations. To support the change, the unmanned K-MAX team is developing an auxiliary fuel tank and hot-refueling capabilities for the helicopter.

In addition to reducing risks for Marines deployed in Afghanistan, the unmanned K-MAX can deliver supplies within about eleven square feet of a targeted position, even with little or no visibility at the delivery site. It also performs at a fraction of the operating and maintenance costs of manned Marine Corps rotorcraft (the CH-46, CH-53E and MV-22).