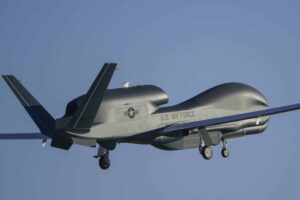 Both aircraft were delivered ahead of schedule in late November.

In 2012, three new Global Hawks were delivered to the Air Force and five previously delivered aircraft completed installation of additional sensors that will allow them to gather multiple types of intelligence data during a single mission.

A total of 37 Global Hawks have been delivered to the Air Force.

Global Hawk carries a variety of intelligence, surveillance and reconnaissance (ISR) sensor payloads that allow military commanders to gather imagery and use radar to detect moving or stationary targets on the ground. The system also provides airborne communications and information sharing capabilities to military units in harsh environments.

Global Hawk has logged more than 80,000 flight hours and has been used over battlefields in Iraq, Afghanistan and Libya. The unmanned aircraft system has also supported intelligence gathering and reconnaissance efforts following the devastating earthquakes that struck Haiti and Japan.