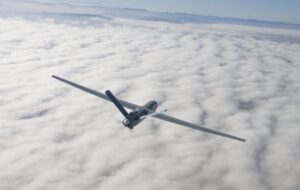 The 18+ hour long test flight commenced on January 20th at 9:05am and concluded with automatic landing on January 21th at 3:15am, after successful demonstration of full endurance and 200 km data link range performances under winds reaching to 45 kts.

During the flight, Air Traffic Control (ATC) coordination was achieved through on-board radio, which was relayed to GCS (Ground Control Station) over the data link, demonstrating ANKA’s capability to operate safely in an airspace managed by ATC.

During the acceptance campaign, which has been in progress since Fall 2012, about 130 different ground and flight tests were successfully accomplished, witnessed by MoD Undersecretariat for Defence Industries (SSM) and Turkish Air Force representatives, proving ANKA systems’ mission readiness.

Contract negotiations are already underway with SSM for the initial serial production of ten ANKA systems for the Turkish Air Force.