RAPTR SUAS to be Used in RAPS Tests 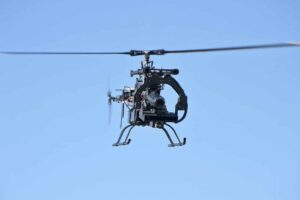 Tactical Electronics, supplier of the RAPTR UAV has been selected to participate in the upcoming SUAS demonstrations for the Robotic Aircraft for Public Safety (RAPS) project.

As stated in the Privacy Impact Assessment for the RAPS project, “The Department of Homeland Security (DHS), Science &Technology (S&T) Directorate and the State of Oklahoma are partnering on the Robotic Aircraft for Public Safety (RAPS) project to test and evaluate Small Unmanned Aircraft Systems (SUAS) for potential use by the first responder community and DHS operational components.”

The RAPTR is a fully autonomous, VTOL, small unmanned aircraft system (UAS), which primarily serves as a delivery/transport platform for intelligence, surveillance, and reconnaissance payloads. The system weighs less than 21 pounds with batteries, utilizes manual and autonomous flight modes, and advanced ground station control. The RAPS project will determine the effectiveness of the SUAS in supporting emergency responder operations.

“The RAPTR SUAS is used to provide operators with time critical information around a target area before and during an assault, enhancing overall situational awareness and ultimately preventing loss of life,” Curtis Sprague, Director of Aviation at Tactical Electronics said.

Tactical Electronics will participate in initial testing at the Fort Sill U.S. Army post in Oklahoma. The RAPTR will be evaluated on “key performance key performance parameters (e.g., endurance, stability, and resolution) under a wide variety of simulated, but realistic and relevant real-world operational scenarios, focusing on response to situations where human lives or property are in imminent danger. Safety concerns are also assessed, including the aircraft’s capability for safe flight in the event of a loss of communications between the aircraft and the ground controller,” the project states.