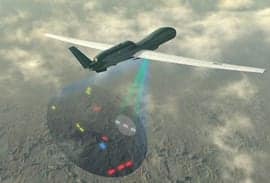 Under this contract, General Dynamics Canada will provide the software that will control the AGS Communications Ground Control System (CGCS). The CGCS will manage radio and satellite communications between Global Hawk unmanned aerial vehicles (UAVs) and the main operating base in Sigonella, Italy. General Dynamics Canada will also deliver ruggedized computer workstations and the Voice over Internet Protocol (VoIP) intercom systems that will enable communications between operators at the operating base and with mobile command centers. In addition, the company will provide engineering support for the integration of its software and systems at Northrop Grumman’s facilities in the United States, and at the main operating base in Italy.

“This contract highlights the capabilities of the world-leading communication solutions we have developed through many years of innovation in airborne ISR systems,” said David Ibbetson, general manager for General Dynamics Canada. “It showcases Canadian technology that we have successfully deployed on the CP-140 Aurora as part of the Aurora Incremental Modernization Project, and on the CH148 Cyclone as part of the Maritime Helicopter Program. At the same time, it provides us with the opportunity to leverage the experience and expertise of the highly skilled employees at our facilities across Canada. As important, the key technologies being provided by General Dynamics Canada will be available for future UAV-based programs in Canada, such as the Joint Unmanned Surveillance Target Acquisition System and the Mercury Global Wideband Global Satellite communications system.”

The NATO AGS program, led by Northrop Grumman, is a major international procurement initiative to establish an airborne ground surveillance system, which can provide NATO commanders with a comprehensive picture of activity on the ground. It includes five Northrop Grumman high-altitude, long endurance Global Hawk UAVs, missionized to NATO requirements; Mobile Ground Command and Control Vehicles; as well as associated command and control base stations. Once deployed, the AGS system will enable NATO and its coalition partners to gather intelligence, surveillance and reconnaissance information to support military and humanitarian operations.

Development and production of the AGS program is expected to take place over the next three years, with initial operation scheduled for November 2016. General Dynamics Canada will continue to provide in-service support for the system beyond 2016.