Existing aerospace enterprises and the hope of more to come served as the backdrop Thursday night for the Jackson County Economic Development Foundation’s annual investor’s dinner at the Ocean Springs Civic Center. 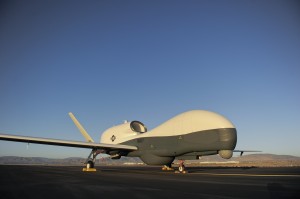 The MQ-4C BAMS — unmanned aerial vehicles the Navy will use for surveillance – are based on the Air force’s RQ-4B Global Hawk drone, which also began life at the facility near the Trent Lott International Airport.

“In economic development, we pursue job creation in fields with high-growth potential,” said George Freeland, executive director of the JCEDF. “These unmanned systems are the highest growth sector in aerospace, and Jackson County has that by the toe.

“While we build ships and refine gasoline and that’s the backbone of our economy, it’s important for us to focus on what we are already doing and doing well in aerospace. That’s the best message for us to get out as we pursue more.”

Walt Kreitler, the director of BAMS UAS program for Northrop Grumman, and Michael Toscano, the president and CEO of the Unmanned Vehicle Systems International, were the featured speakers at the dinner.

Kreitler noted that the “incredibly complex fuselages” built at the Moss Point facility are the “heart and soul” of the aircraft.

The new Northrop Grumman fuselage will go inside a Triton that will be delivered in October 2014, leaders said. After Moss Point constructs the fuselage, it will be sent to Palmdale, Calif., for final assembly.

The Navy’s version of the drone has a 130-foot wingspan and is equipped with a multi-function active sensor radar system, which is mounted on a pedestal at the bottom or the aircraft to offer a 360-degree view.

The Triton will be able to cover more than 2.7 million square miles in a single mission with a range of 2,000 nautical miles.

Toscano, the keynote speaker, highlighted the emerging transition of unmanned systems for military use to civilian and commercial use.

“It’s a growth industry and it’s coming fast and furious,” he said. “The military builds unmanned systems to save money. Industry is building them to make money.”

Toscano referred to ages 16 and under as “digital natives” and others as “digital immigrants.”

“As that generation comes along, they will expect this technology, want it and demand it,” Toscano said. “It may take one or two generations to get here, but it’s coming like a locomotive.”

Toscano noted the use of unmanned systems in “precision agriculture,” maximizing crop spraying with remote aircraft.

He said in Japan that 90 percent of the crop spraying is done by unmanned systems.

The good news for Jackson County is that technology we being developed here, which gives the region a significant advantage when courting new aerospace business.

“Northrop Grumman’s recent expansion of a new product line is a great indication of our place in the emerging field of unmanned systems and where we are headed,” Freeland said.

Freeland and county officials also continue their relentless pursuit of spinoff businesses from the $600 million Airbus A320 assembly line in the works at Brookley Field in Mobile.

“You can’t hardly pick up a newspaper or listen to a newscast and not hear something about the Airbus line,” Freeland said. “We’ve done a number of things over a number of years to pursue that business. We already have a major role in aerospace right now this minute in Jackson County and that’s the message we carry.”