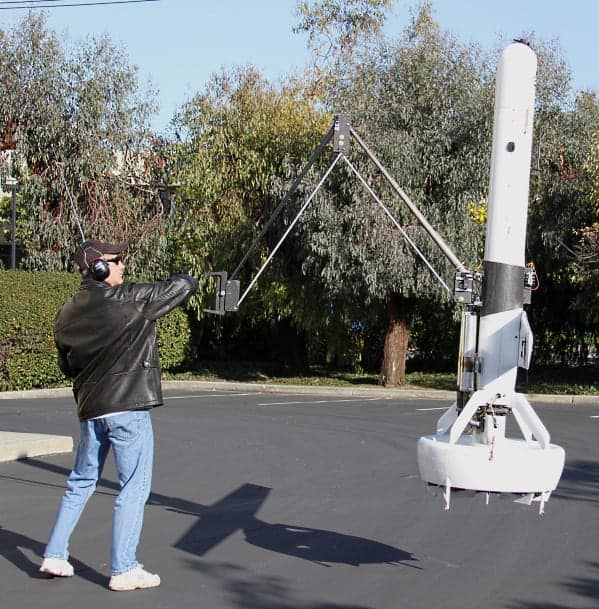 Testing of the UAV’s precision placement of a payload proved successful. An operator extends the robotic arm of the modified V-Bat UAV built by MLB Company of Santa Clara, California.

When a person reaches out to place an object in just the right place, their mind makes a series of judgments requiring vision, stability and careful movement.Trying to do the same thing robotically from a hovering unmanned aerial vehicle (UAV) requires several technology advances.

A DARPA-funded technology demonstration recently finished a successful testing of vision-driven robotic-arm payload emplacement using MLB Company’s (Santa Clara, California) tail-sitter UAV, V-Bat. This UAV is capable of both hover and wing-borne flight, making the delivery and precision emplacement of a payload possible. A special robotic arm was designed with the capability of carrying up to 1 pound.

The research team designed and developed a low-cost vision system to estimate the target’s position relative to the hovering vehicle in real time. This vision system enables the UAV to search and find the target for the emplacement autonomously and then perform the action.

“Our goal with the UAV payload emplacement demonstration was to show we could quickly develop and integrate the right technology to make this work,” said Dan Patt, DARPA program manager. “The success of the demonstration further enables the capabilities of future autonomous aerial vehicles.”

During this technology demonstration, the MLB Company-built V-Bat successfully demonstrated: 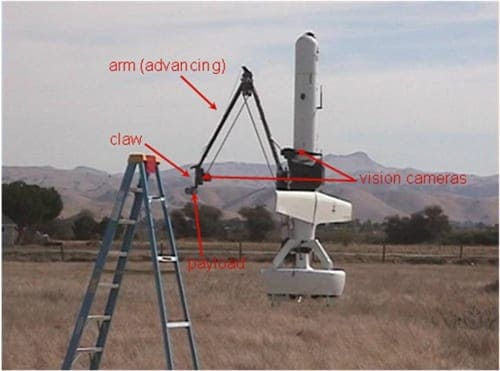 Still-frame from video captured during testing. Here, the arm is advancing with the claw ready to clamp onto the rung of the ladder. 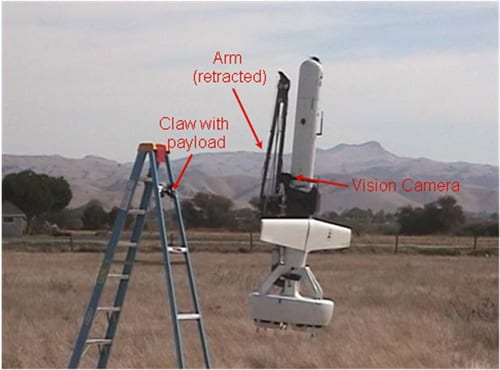 With the claw attached to the target, the arm retracts and the UAV disengages.