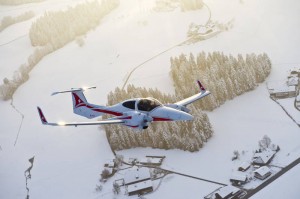 Aurora Flight Sciences has delivered the world’s first production Optionally-Piloted Aircraft (OPA) system to Switzerland’s Department of Defence. The Centaur OPA, flown by an onboard crew in FAA Normal Category, departed the Manassas Regional Airport in Virginia on November 26 for delivery to armasuisse at the Emmen Military Airfield in Switzerland. It arrived at Emmen on November 28.

The Centaur OPA is a new type of aircraft that can be flown in both manned and unmanned configurations. A third flight configuration, the hybrid mode, allows for control from the ground with a safety pilot onboard the aircraft. The capability to fly both manned and unmanned missions creates a system with optimal flexibility for the operator. The hybrid flight mode facilitates flight operations that are identical to an unmanned aircraft by utilizing a safety pilot to watch for other aircraft or take over control in an emergency.

Armasuisse is the official procurement agency of the Swiss Department of Defence and operates its own Flight Test Center. Upon installation of the OPA equipment and site preparation of Aurora’s Ground Control Station in January 2013, armasuisse will use Centaur as a flying test bed. Initial projects include new sensors as well as sense and avoid equipment required to operate Unmanned Aircraft Systems (UAS) in the entire Swiss National Air Space (NAS). The Swiss are leaders in the development of UAS operations in complex and dense airspace. Following hybrid mode flight tests in Virginia and Switzerland, armasuisse will have the ability to operate Centaur unmanned in March 2013.

The Centaur OPA’s unique design with its hybrid flight mode make it an ideal platform for research and development. Centaur is based on the successful Diamond Aircraft DA42MNG, a four-seat twin-engine heavy fuel aircraft specifically designed to deploy airborne sensors. Centaur is the world’s first OPA to retain its FAA and EASA Normal Category Airworthiness Certification in the manned flight mode with the ability to provide its full functionality for unmanned flight. The conversion between manned and unmanned flight modes only takes four hours to complete. Centaur is able to carry its own ground control station, making it the world’s first self-deployable unmanned aircraft system.

“Centaur is an ideal platform for Switzerland’s initiative to develop new technologies that will enable UAV operations in the Swiss National Air Space,” said Dr. John Langford, Aurora Flight Sciences’ Chairman and CEO. “Coupled with our recent selection by the US Navy for the AACUS program and by DARPA and Raytheon for the PCAS program, Centaur establishes Aurora as the industry leader in Optionally-Piloted Aircraft technology.”