AeroVironment Teams Up With CybAero to Develop VTOL UAS 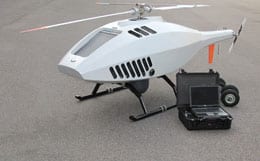 AeroVironment, Inc. has announced it has entered into a strategic relationship with Sweden-based CybAero AB to develop and distribute a Tier II vertical takeoff and landing (VTOL) unmanned aircraft system in response to unmet requirements from multiple customers. The relationship gives AeroVironment exclusive rights to provide CybAero AB systems to United States customers and to government customers in NATO and other countries. AeroVironment has agreed to purchase up to $3 million in convertible notes from CybAero to facilitate the company’s growth.

“CybAero is a pioneer and leader in the Tier II VTOL market. Our joint team has demonstrated this reliable, cost-effective Tier II UAS solution that will build on AeroVironment’s family of small UAS, expanding our customer offering,” said Roy Minson, AeroVironment senior vice president and Unmanned Aircraft Systems general manager. “With its significantly greater endurance and payload capacity, small footprint and ease of use, this new system will join our family of UAS and deliver a robust vertical takeoff and landing capability to current and new customers seeking that Tier II solution.”

“We are working with CybAero to integrate their product into our system solution and will invest to add critical capabilities required to bring the most competitive offering to market,” Minson added.

AeroVironment and CybAero have been working together very effectively to incorporate capabilities required to meet the requirements of United States government and other customers.

“AeroVironment is the clear leader in the man-portable, hand-launched UAS market, with an intimate understanding of customer operational requirements,” said Leif Erlandsson, CybAero’s chief executive officer. “We believe that AeroVironment possesses the experience, relationships and systems integration skills to bring all the benefits of our VTOL system to customers in the United States and beyond. We look forward to continuing our work together to increase the safety and operating effectiveness of AeroVironment’s customers.”