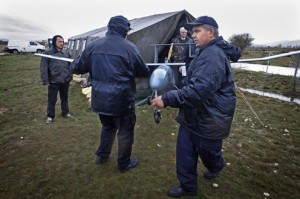 Unmanned Aerial Vehicles (UAVs) are suitable, among others, for performing disaster relief tasks and dealing with emergencies, Minister of Defence Csaba Hende said at the display of Hungarian-developed UAVs in Veszprém on Monday, November 5.

According to the Minister of Defence, besides the military field the so-called drones may provide assistance in the civil field as well, for example in recovering missing persons or in mapping various pipelines, networks and settlements.

Speaking in the Veszprém-Újmajor military training area of the Hungarian Defence Forces Bakony Combat Training Center, Minister Hende said that the Hungarian Defence Forces acquired 21st century reconnaissance capabilities with these aircraft. He added that with regard to the Force Protection level of our soldiers serving with missions abroad, it is of utmost importance that their movement is assisted by UAVs which reconnoiter their route, the attackers lying in ambush for them and the roadside bombs.

The Minister pointed out that all parts of the Hungarian drones – including hardware and software – are Hungarian developments and create jobs in Hungary.

Answering a question from the Hungarian News Agency MTI, Csaba Hende said that the Ministry of Defence was planning to procure drones, which would take place after a so-called troop trial: the Hungarian Defence Forces would test the UAVs and possibly make proposals as to how they can be made even more suitable for military purposes, and then the procedure for entering them into service may begin. Within this, the drones and the ground control devices will be integrated into the arsenal of the Hungarian Defence Forces in accordance with various military standards.

The Minister noted that from the viewpoint of national economy, it is very significant that these items of equipment can be procured as Hungarian-made products, because in this way they cost half as much as if they were purchased from abroad. He expressed hope that the defence industry companies of the Hungarian Defence Forces would successfully sell their new developments in the civil field as well, since these items of equipment can be applied in many different fields. The Ministry of Defence Electronics, Logistics and Property Management Private Company Limited by Shares (MoD ED Co.) and the MoD Currus Ltd started research in the field of UAVs in 2007, and by 2012 a complex system has been created, said Lajos Móró, the CEO of the MoD ED Co.

He told us that the aircraft Ikran is capable of planning a pre-programmed reconnaissance flying mission and tracking its progress. Its onboard HD camera has a 12x optical zoom and its nose camera helps the pilot’s maneuvers with telemetric data. The Bora aircraft has the same range of capabilities but additionally, it is equipped with an HD image processing, comparing and evaluating software.

The Hungarian drones have user-friendly software, their use is easy to learn, and they are operated by a crew of only three. The development of these aircraft is directed towards the upgrade of the controlling robotics, the simultaneous programmed flight of multiple aircraft, the development of flight planning and control programs and the integration of imaging devices into the aircraft – Attila Molnár, the CEO of Currus Ltd pointed out. The field display on Monday was almost prevented by the extremely strong wing, but finally the UAVs successfully went airborne.