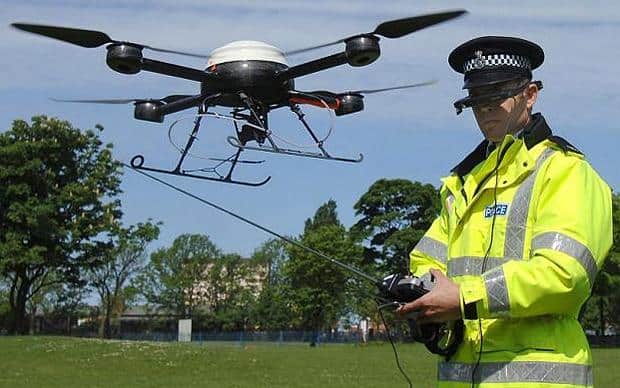 The Microdrone UAV, already in use by Merseyside police

Alex Marshall from Hampshire Police was speaking ahead of the launch of the new National Police Air Service (NPAS) today, which it is hoped will cost millions less than the current localised system.

The senior officer, who is leading the scheme for the Association of Chief Police Officers, said drones can stay in the air longer and would be cheaper than running manned aircraft.
“We don’t use them in mainstream policing at the moment but they may well offer something for the future,” Mr Marshall said. “They can stay up longer, they’re cheaper, they can do things that you can’t do having people in the air.

“But the Civil Aviation Authority for example, doesn’t allow the use of drones out of line of sight, and there are other restrictions on using them.

“Plus the debate that still needs to be had, it might be cost effective, you might be able to keep it up longer, but is it acceptable to the citizens of the UK to have them in the air?

“Within line of sight they’ve been used by police and fire for just monitoring a building or whatever it might be. We should be looking at different ways of providing air support in the future that don’t involve putting humans up in the air, but the public need to find it acceptable and it needs to be within the law.”

Speaking at Redhill Aerodrome, Damian Green, the Home Office minister, said they should only be used where “appropriate”.

“Drones are like any other piece of kit – where it’s appropriate or proportionate to use them then we will look at using them.

“But they need to be treated the same as any other piece of police equipment or police activity.

“They should only be used when it’s appropriate and proportionate to do so.”

The proposals will alarm privacy campaigners who fear cheap unmanned drones will lead to an increase in surveillance of the public.

The national air service will have 26 helicopters running from 23 bases across the country. It amounts to a cut in the number of police helicopters, with seven bases closing.

It is estimated that the cost of running air support will fall from around £63 million to around £48 million, and forces are aiming to maintain the target of an average response time of 20 minutes.

South Yorkshire initially refused to agree to the plans for a national service, and as a result former policing minister Nick Herbert ordered it to take part.

It wanted to maintain a helicopter based in Sheffield, and under the new system has to cover the cost of that service by itself.

Mr Marshall said: “Artificial boundaries have meant that helicopters are restricted to operating within their own force area or consortia.

“From catching criminals to ensuring the safety of crowds, helicopters and other means of air support are essential tools in the fight against crime, but they are costly and in some areas used infrequently.

“This programme should ensure that forces retain the right capability to call on air support to protect the public whilst sharing its considerable costs.

“Police authorities have been key partners in getting this programme off the ground – it will be for elected Police and Crime Commissioners to ensure that it delivers the considerable benefits it has promised the public.”